Hazards Of Road Salt Begin To Get Attention 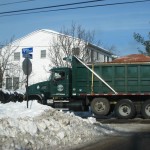 When it’s icy or it snows, officials drop tons of salt and other de-icers on roads in Monmouth and Ocean counties to help make them safer. But what’s the environmental impact of all the salt that’s been deployed this winter, which has featured three major snowstorms so far? Officials aren’t sure but recommend limiting use of rock salt and other products. “There is an impact of salt on water quality,” said Barry Chalofsky, chief of the Bureau of Nonpoint Pollution Control in the state Department of Environmental Protection. “We don’t know the degree of the impact.”

With record-setting snowfall in New Jersey this winter and more storms possibly on the horizon, hundreds of trucks have been out spreading rock salt and alternatives onto highways and roads. But some officials, including those in Monmouth County, are using or considering products with less environmental impact.

“With all the snow we’ve had and having to apply more salt, it cannot have a beneficial effect on water quality,” said Turner Shell, watershed/stormwater coordinator with the Monmouth County Planning Board.

But salt-contaminated runoff from streets and highways can damage nearby trees and shrubs and affect aquatic ecosystems when it reaches streams and other surface waters, according to the report.