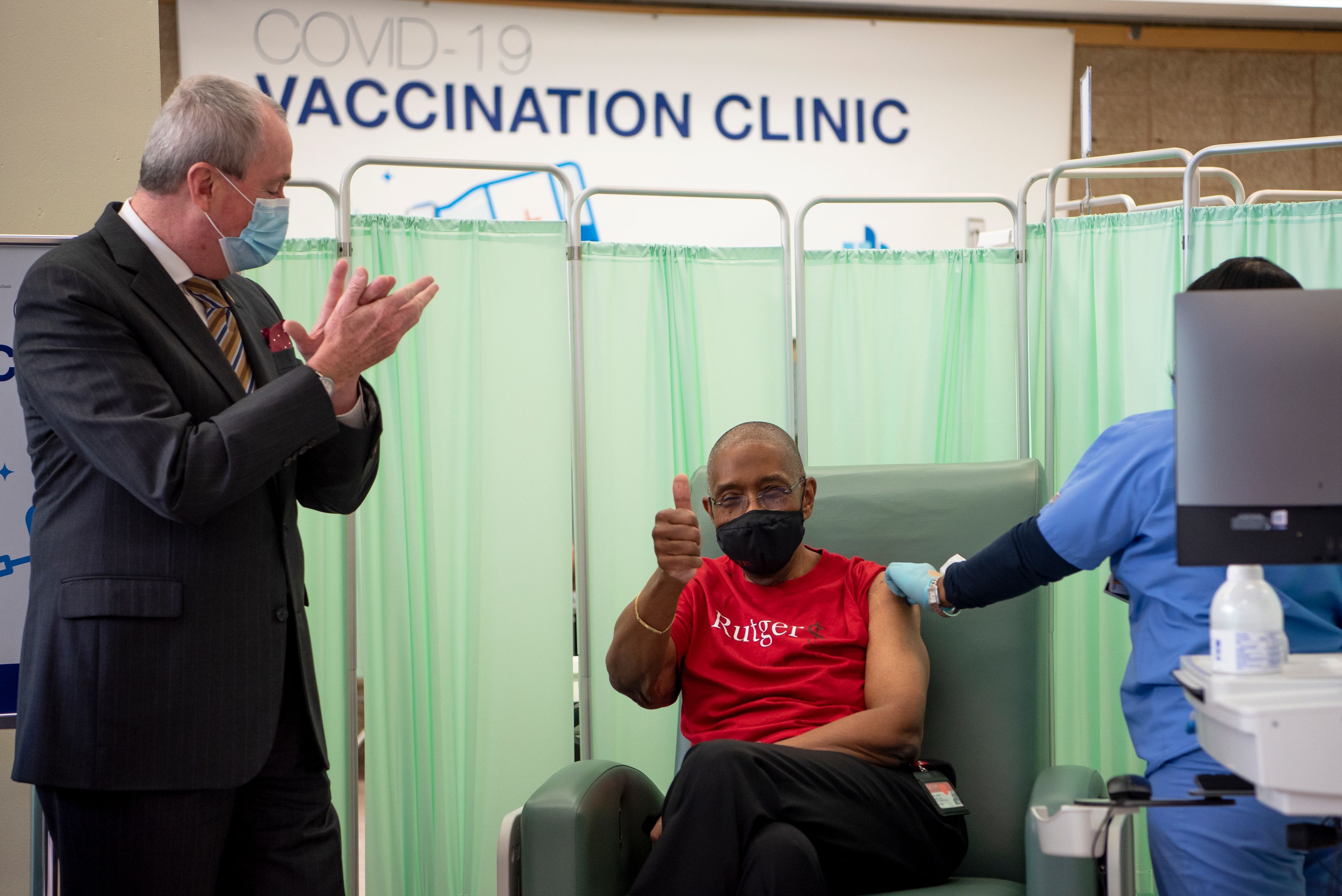 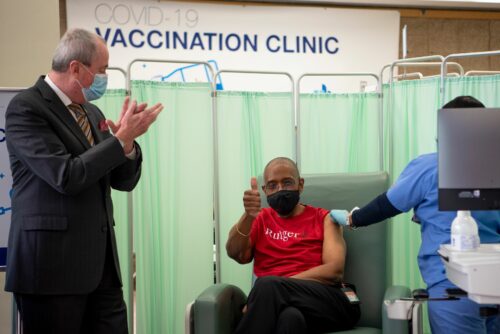 The 56-year-old emergency room nurse at the Newark hospital seemed excited. This was the final shot she needed after receiving the first a few weeks earlier.

“I now have body armor,” Beniquez said, laughing before the small crowd of medical staff and reporters gathered in a room inside the facility. The room was lined with dividers for other front line workers to receive vaccinations.

University Hospital workers were the first in the state to receive the second round of the two-shot vaccine and complete the program, developed to end the COVID-19 pandemic.

Before the vaccine was administered, Beniquez laughed and joked with Gov. Phil Murphy and state Health Commissioner Judy Persichilli, who were in attendance along with officials from University Hospital and Rutgers New Jersey Medical School.

When Beniquez got her shot, the room clapped. Beniquez, wearing blue scrubs, raised her left arm and gave Murphy an elbow bump.

After Beniquez was administered the dose, Dr. Robert Johnson, dean of Rutgers Medical School, received his second shot of the vaccine.

“Walking away now, I know that by the end of this month, I am 95% immune,” Beniquez said, answering a few questions from reporters.

Beniquez said she expects to feel a little soreness at the injection site, and that after her first shot, she had a slight headache, but nothing more. She doesn’t expect anything different with the second dose.

“But again, if that’s the worst that I can expect, I’ll take that over an intubation any day of the week,” she said.

Beniquez, who is Hispanic, acknowledged the fears of taking vaccines, particularly in communities of color.

“I do not fault them,” she said. “I, too, am a Latina, and I, too, am a woman of color. And I understand and I feel that pain. Because these are my people that have suffered a lot of the injustices. So I understand their skepticism when it comes to medicine. But I want them to know that this is not that. And that the greatest injustice that we can do to ourselves as a Black and Latino or any sort of minority is to fall back on fears that are from the past and bring that to the future when there’s hope for tomorrow.”

Johnson, 74, said he also understands the skepticism surrounding vaccines. But he pointed to the large number of COVID-19 deaths in the Black community, especially in Essex County, where University Hospital is located.

“This is the thing we can do to protect ourselves,” he said.

University Hospital is conducting about 400 vaccinations a day, though Dr. Shereef Elnahal, the facility’s CEO and a former state health commissioner, said the facility has the capacity to do up to 600 a day.

So far, University has conducted about 3,000 vaccinations.