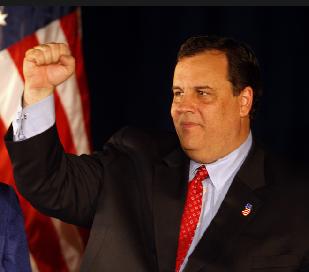 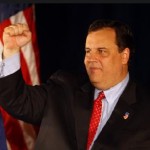 Chris Christie, a candidate with bravado to spare, was a humble and hopeful governor-elect in his victory speech last night. In a 15-minute address to a packed hotel ballroom of supporters, Christie repeatedly hit notes of change and post-partisanship, at times sounding like an echo of President Obama’s campaign mantras in 2008. “The times are extraordinarily difficult, but I stand here tonight full of hope for our future, full of expectations and dreams,” Christie said. “I beg you, let’s turn the page. Let’s put the petty politics of the past behind us, and let’s start a new era of hope and optimism in New Jersey.”

Christie entered just before 11:15 p.m. to “Born To Run,” his campaign anthem, and roamed about the stage as if on a victory lap, pointing at individual supporters before grabbing running mate Kim Guadagno’s arm and raising it in the air.

His wife and four children wore ear-to-ear grins as the crowd screamed with delight.

Christie shook his head as if in disbelief as he first stepped to the podium. As he thanked the crowd, they began chanting “Thank you” and “Yes we can,” Obama’s signature chant. “Please no. Come on now,” he said to silence the rowdy crowd when they booed at the mention of Democratic Gov. Jon Corzine.

He said the governor was gracious in his concession and pledged a smooth transition. Christie acknowledged a rough road ahead in a financially strapped state, but said he has proved “naysayers” wrong before.

Christie said his victory sends a message about the attack ads such as those Corzine ran against him in recent months. Though Christie was plenty harsh on Corzine’s record, he said he decided early in the campaign not to go personal no matter what his opponents did.

“I worked too hard over my life to give away my integrity for any job,” Christie said to applause. “Let me tell you this — through their overwhelming support tonight, the people of New Jersey said no more negative personal campaigning.”

He closed with a promise and a reminder of the responsibility he feels as a native son.

“I was born here and I was raised here and this is the state that I love, and I will tell you, I have known from minute one of this campaign that we can change New Jersey,” he said. “So tomorrow, let’s roll up our sleeves. Let’s get to work at the hard task ahead of us. At the end of these four years, I promise you one thing — that we will restore your hope and your faith and your trust in New Jersey.” Star Ledger