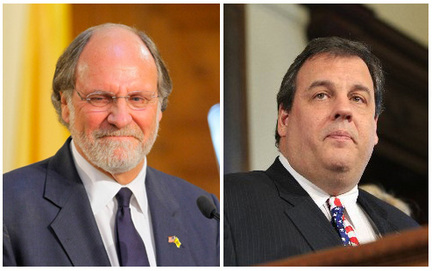 Lingering animosity between New Jersey’s former and current governors reached a boiling point today, as a dispute over the health of the state budget threatened long-term consequences. Just 48 hours into his new role, Gov. Chris Christie said New Jersey faces a $1.3 billion shortfall in the current budget and blamed former Gov. Jon Corzine for setting him up to fail by hiding the depth of the problems. “He was trying to make it as hard as he possibly could,” Christie said. “Avoidance of the facts and avoidance of the truth was a staple of the Corzine administration.”

Corzine and his advisers accused Christie of pulling numbers out of thin air and insisted they left the incoming governor with a $496 million surplus.

“Gov. Christie’s remarks demonstrate a poor temperament, and a casual relationship with the facts,” said Corzine spokesman Josh Zeitz. “Being governor entitles you to do a lot of things, but fabricating budget numbers from whole cloth isn’t one of them.”

The political vitriol between the Democrat Corzine and Republican Christie has persisted with few breaks since Christie defeated Corzine Nov. 3. But with investors and lawmakers dependent on accurate financial information — and another multi-billion-dollar shortfall looming for the next budget — the conflict means more than just the sniping of two bitter rivals.

At issue is the validity of revenue projections for the ongoing $29 billion budget Corzine signed last June. A memo by Corzine Treasurer David Rousseau said that while the overall budget deficit was $1.1 billion — including a revenue shortfall of $425 million — a series of budget cuts and other actions left a $496 million surplus as of Jan. 14.

Christie, however, said he asked the Treasury Department on Tuesday to forecast revenue through the end of the budget year June 30 and was told tax collections would be $1.2 billion short. After factoring in his advisers’ interpretations of Corzine’s spending and cuts, Christie came up with a $1.3 billion deficit and said he is looking at various options to fix it.

“There are people who rely on this kind of financial information,” Abelow said. “(Corzine) was going to leave the house in order.”

Christie countered: “These were projections that were available to them and they did not share with us.” He challenged Rousseau to “come find” the surplus.

Christie also found fault with Corzine’s last-minute appointments of several allies to state boards that in some cases will allow them to maintain and boost their public pensions. He vowed to take “a hard look” at the necessity of such boards and eliminate “a bunch” of them. Zeitz said Republicans have made similar moves for their allies. Star Ledger.