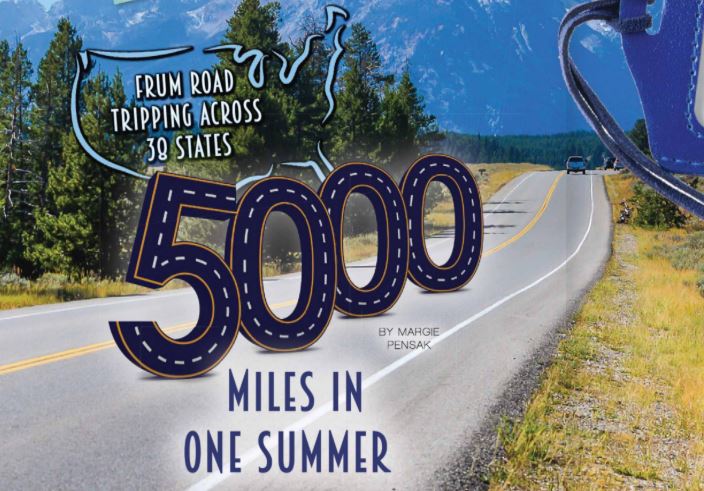 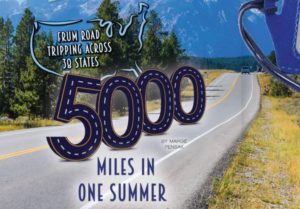 By Margie Pensak. I’m not sure if kids still get the expected first day back-to-school “What I Did on My Summer Vacation” writing assignment that I did, back in the day, but when I finally caught up with Floridian Miriam Cohen on her stopover in Wyoming, I couldn’t help but be reminded of my fond childhood memory. Actually, the annual multi-state road trip that she was driving, together with her four daughters, would more appropriately be a book rather than a composition! I felt fortunate to finally connect with Mrs. Cohen in the middle of her fourth summer road trip, after some unsuccessful attempts—unsuccessful because, little did I know, they were on a three-quarters of a mile, one-thousand-foot-high hike to the top of a cavern in South Dakota and had no phone service!

Since their first road trip, the much-looked-forward-to four to six week adventure has turned into an all-girl trip. Mrs. Cohen’s husband, Zalman, a Lakewood native, coordinates his business trips and visits to out-of-town Hatzalahs to coincide with his family’s vacation (he runs a printing business and Hatzalah of Miami-Dade, which he founded). And, although their son went on the first trip, he soon after celebrated his bar mitzvah and had to bow out of subsequent ones because of minyan considerations, as does Mr. Cohen. The two of them fly to join the rest of their family a couple of times during the summer, for Shabbos.

It is amazing to me that Mrs. Cohen has always done all the driving, herself, on these trips, and that she typically drives 5,000 miles each summer. This year, Mrs. Cohen and her daughters, ranging in age from 7-1/2 to 13, left home in North Miami Beach on June 25th. When I asked what possesses her to make the trip and marveled how her youngest was only 3-1/2 years old on their first trip four years ago, she told me how it all started.

It All Started with a Visit to Her In-Laws

Four summers ago, I decided I wanted to spend some time in Lakewood visiting my in-laws. I figured that if I flew there with my five kids for 7-10 days, I would still have the rest of the summer to entertain them. I had a neighbor who had a married daughter who lived in New York and she suggested that we take our time driving up north, together. I would drop her off and pick her up in New York, and while she was visiting in New York, my kids and I would spend time with my in-laws in Lakewood.

It took us about 2-1/2 weeks to get up to New York. We went through Atlanta and visited the Coke factory and Centennial Park, my kids got to experience a Colonial and Indian village in Williamsburg, before we spent ten days at their grandparents’ house. On the way home, we stopped in Baltimore to visit family and explore the Smithsonian Museums in Washington, DC, and it was a really great experience. My kids had a fabulous summer. That is how it began. Every year, when we start talking about the summer, my kids want to know where are we driving this year.

Every year we change the route somewhat to widen our experiences. On the second trip, I went a little bit further to the west. There is a fabulous stop in Chattanooga, Tennessee, called Ruby Falls. We started out exploring a system of caves. After hiking for a little while, we could hear a rush of water and wondered eagerly what we would find. It is hard to describe the beauty of an underground waterfall! It is really something special to see. From there, we went up to Kentucky, stopping in Pittsburgh and

Cincinnati. Our big stop was Niagara Falls, and my husband and son met us up there for Shabbos. My kids thought it was really cool because we walked from one country to another, from America to Canada. Leaving Niagara Falls, we went into the Finger Lakes area to Watkins Glen State Park, which is magnificent. We spend half of the summers marveling at the nifalos haborei! We go from place to place saying, ‘Look at this incredible wonder that HaKadosh Baruch Hu created!’ The country has such magnificent, breathtaking scenery. Unless you really see it, you don’t know about it. Half of these places I never heard of until I started researching and figuring out our trips.

We tend to explore many historical sites so my kids learned a lot of the history of America. One year, we drove up to Boston, stopping at the Mayflower, walking the Freedom Trail and seeing the site of the Boston Tea Party. That year, as we were driving home, we stopped in Washington, DC, at the American History Museum, and there was a whole room about the Boston Tea Party and the Freedom Trail. My kids said, ‘Oh my goodness, we were just there!’ It was really cool for them, because there was a lot of hands-on learning at the same time that they were having fun.

Read more in the Family Room.