Freeholders: Make Sure Your Children Receive their MMR Vaccination Before they Begin School 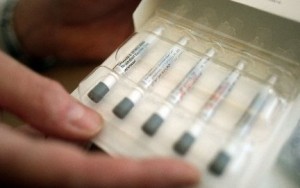 Ocean County Freeholder Director Joseph H. Vicari, said, “During the first five months of 2014, there have been 16 outbreaks and almost 500 reported cases of measles in the United States. It is the highest number of cases since 2000, and the number continues to rise. Almost all the outbreaks can be traced to an unvaccinated individual who contracted the disease while traveling abroad.” He added, “As a former teacher and school administrator, we were always concerned for the safety and health of the children in addition to our staff members, especially teachers, who have close contact with children.”

Ocean County Freeholder Gerry P. Little, Liaison to the Ocean County Board of Health, stated, “Immunization is the best defense against measles, with 99 percent of persons developing immunity after two doses. The first dose is given after the first year, usually around 15 months and the second dose between the ages or 4 and 6, but BEFORE a child begins school.”

Freeholder Director Joseph H. Vicari, who is also the Chairperson of the Ocean County Office of Senior Services, reminds anyone born since 1957 that has not had two doses of vaccine, may still be vulnerable to measles and should ask their doctor about getting immunized. He said, “Many people born before 1957, had the measles and are naturally immunized against the disease. We also need to remember that measles is not something that many of our doctors today have ever seen or ever needed to diagnose. Although we are thrilled that many of our vaccine-preventable childhood diseases are virtually eliminated, when a case does present itself, this may be something doctors need to familiarize themselves with.”

Daniel Regenye, Ocean County Health Department (OCHD) Public Health Coordinator, continued, “Measles is a highly contagious viral disease that is spread through the air when someone who has measles coughs or sneezes. Symptoms begin with a fever that lasts for a couple of days, followed by a cough, runny nose, red, watery eyes, and rash. Infected people are usually contagious for about eight days: four days before their rash starts and four days after. There can be mild to severe complications, including death, from measles. Infants, pregnant women and immune-compromised persons are more susceptible to complications from measles.” Regenye added, “Measles germs can remain in the air for hours after an infected person has been in the room and is easily transmitted to an unvaccinated person who comes into that room.”

Some parents mistakenly believe they are protecting their children against neurological harm and refuse to vaccinate their children while encouraging others in their communities to do the same. Pediatricians and infectious disease experts warn that these parents are putting their unvaccinated children and the general public at risk. Measles remains the eighth leading cause of mortality worldwide and the greatest vaccine-preventable cause of death among children. Studies indicate that unvaccinated children are 35 times more likely to contract the disease than immunized children.

“We want to do everything we can to prevent measles cases,” said Regenye. You can view immunization charts for children, teens and adults on the Ocean County Health Department website at www.ochd.org. [TLS]