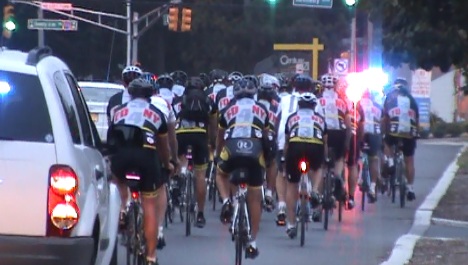 VIDEO & PHOTOS: This evening, approximately 35 Firefighters rode through Lakewood en-route to the Pentagon, in a 343 mile bike tour in honor of the FDNY members who died in the September 11 attacks.

This Sunday marks the 10th anniversary of the fateful September 11, 2001, and in order to honor the memory of the 343 firefighters that died at the World Trade Center, members of the FDNY will ride bicycles 1 mile for each of the firefighters that were lost that day.

The ride began yesterday from Montauk Point, Long Island, NY and will end at the Pentagon in Washington D.C. on September 11.

All proceeds from the ride will help support injured veterans that have been protecting this country for the last ten years.

Lakewood Officers escorted the cyclists from the Howell border, until the Toms River border. TLS-CCP.