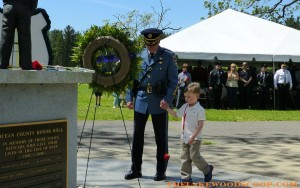 Ocean County will remember its fallen police officers and will honor all peace officers during the annual Law Enforcement Memorial Day Service in Lakewood this week. The event is scheduled for 10:30 a.m., Friday, May 16, at the Ocean County Police Academy, Ocean County Park, Route 88.

“We take this day to celebrate the lives of OceanCounty’s fallen officers,” said Freeholder John P. Kelly, Director of Law and Public Safety. “As we recall those whose names are etched on the Police Memorial, we remember that they have made the ultimate sacrifice. Their service will never be forgotten.”

Retired Police Chief William Dikun, who is the Chief Police Instructor at the Ocean County Police Academy, will serve as master of ceremonies. Lakewood Mayor Menashe P. Miller will give the keynote address.

The Point Pleasant Borough High School Panther Concert Band, under the direction of Scott Visco will perform as will the Ocean County Vocational Technical Schools Performing Arts Academy Vocal Ensemble under the direction of Mary Huhmann, vocal music instructor. Also participating are honor guards, motorcycle squads, bagpipers along with members of the Ocean County Sheriff’s Department, the New Jersey State Police and representatives of law enforcement agencies from throughout OceanCounty.

“We encourage our citizens to attend this ceremony,” said Freeholder Director Joseph H. Vicari. “It gives us an opportunity to remember the fallen and to recognize the loved ones they have left behind.”

The families of those OceanCounty officers killed in the line of duty will be recognized during the ceremony during the placement of a wreath at the Police Memorial.