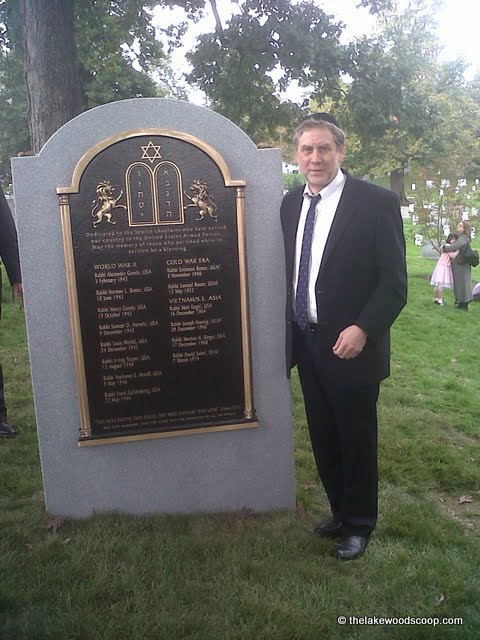 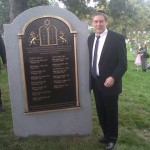 PHOTOS: 14 Jewish U.S. military Chaplains who died while serving our Country since WW II, were officially recognized during a ceremony yesterday at the Arlington National Cemetery, near Washington D.C., when a monument with their engraved names was dedicated in their memory.

The memorial was placed alongside other memorials on Chaplains Hill for other fallen Chaplains at the nation’s largest military cemetery.

Attending the ceremony, was Lakewood resident Rabbi Fishel Todd, who serves as the endorser of Frum Chaplains in the Military, via Yeshiva Pirchei Shoshanim.

“It was a tremendous Kiddush Hashem”, says Jewish Chaplain Endorser Rabbi Fishel Todd. “For many years, there has been a very false impression that Jews do not serve in the Military which is a serious misnomer”, Todd says. “So while the other religions have had memorials such as these, the Jews were not recognized. Through this dedication the visibility and acknowledgement of the Jewish people to the
American Military effort was finally validated, let alone the lack of recognition of the sacrifice of so many young Jews who gave of  their lives to a country that has given us a freedom to service Hashem like no other in the history of the world”.

Rabbi Todd adds, “The  participation of Torah Jews in the Chaplaincy corps is a very necessary component and a must. Time and time again when a Torah Jew adheres to the Halacha it makes everyone stand up and  take notice. At West Point, a frum cadet joined and an Eruv had to be constructed around all of  west point to accommodate him. Our battle is to show we are Torah observant and are a haven for Emess”.

The 14 chaplains representing all the major denominations of Judaism, lost their lives while on active duty during World War II, the Korean War and the Vietnam War. Among the group, is Rabbi Alexander Goode, who was one of the Four Chaplains who died when the USS Dorchester troop ship was torpedoed and sank off of Greenland in February 1943, shortly after leaving the port in Staten Island.

(See photo of 89 year old survivor of the ship).

Prior to the dedication at the Arlington cemetery, the bronze monument was driven to many Jewish communities along the East Coast for viewing .