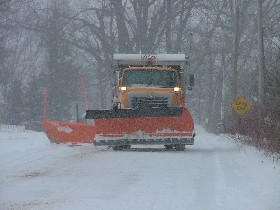 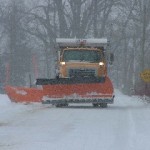 Ocean County is ready to take on Old Man Winter as it makes its way into the area. “We are already hearing predictions for snow and have already seen other parts of the State digging out from one of the first substantial snowfalls of the season,” said Freeholder James F. Lacey, who serves as liaison to the Ocean County Road Department. “We are ready in Ocean County for whatever the upcoming winter brings with it.” The county currently has on hand 15,000 tons of salt and 30,000 gallons of liquid calcium.

Road department workers also continue to make brine – a mixture of salt and water – that is sprayed on the roadways before snow or ice can accumulate.

“We’ve been doing this for a few years now and it has helped in the snow removal process,” Lacey said. “Of course some of the best advice to motorists when it comes to bad weather is be patient and take it slow. Leave yourself plenty of time to get where you are going and if you don’t have to go, stay off the roads.”

During a major snowstorm the road department has more than 100 trucks out including private contractors – salting and plowing.

The first of the county roads to be plowed are known as the 500 series, which includes such main roads as Hooper Avenue in Toms River Township, and Route 571, which travels through Toms River Township to Jackson Township. In Southern Ocean County, those roads include Route 539.

“We start with these main roads and work our way to the secondary roads,” said Ocean County Road Supervisor Stephen F. Childers.

Childers noted that the approach taken by the road department to clear the roadways is based on what the weather has brought to the area.

Winter storms in Ocean County can be very unpredictable.
The inland area of the county may get hit with snow, while the coastal area may see more ice and flooding. Weather in the southern portion of the county may be nothing like what is happening in the northern areas.

“Our road department crews have to react to many different scenarios always focusing on the bottom line of keeping the roads safe,” Lacey said. “Icing and freezing rain is often the more difficult elements to deal with in the winter months.

“The worst case scenario is when bad weather starts as rain and changes over to ice or snow because of an abrupt drop in temperature,” he noted. “This causes black ice and motorists don’t realize how dangerous this is.”

When surfaces are coated with black ice, the county uses a mixture of salt and grit to melt some of the ice but more specifically to provide added traction for motorists.

The county has 88 trucks that can be used for salting and plowing and about 30 pieces of equipment that can be used just for plowing. Liquid calcium is sprayed on the salt from spray bars located at each of the county garages.

Even though the county has not added miles to its road network it has added width making plowing of widened roads like County Line Road in Jackson Township and Chambers Bridge Road in Brick Township a little more difficult because there are more lanes to handle.

In addition to plowing and snow removal of county roads, the department workers also clear roads in Plumsted Township under an agreement with the county.

The department is also responsible for clearing all the county parking lots including the vocational-technical centers, the resource centers, Transportation Department, and libraries.

Childers noted the Road Department is assisted by other county departments including Solid Waste Management and Parks and Recreation.

“It’s a cooperative effort on the part of the County to make certain our residents are safe,” said Freeholder Lacey. “The cooperation makes for a much smoother and efficient operation.”

Childers also requested that residents be patient when it comes to bad weather.

“Ocean County has 621 miles of roadway that it maintains,” Childers said. “This is the largest county road system in the state.”

Residents can assist the clearing operations by not shoveling snow into the road as they clear driveways.

Lacey noted it was important for everyone to work together when it comes to keeping safe on the roadways.

“Winter driving can pose a number of challenges,” Lacey said. “We make certain the county roads are safe, motorists need to make certain they drive them safely.” Jacksononline.