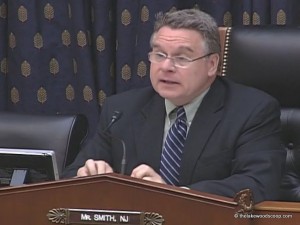 “Ebola had been thought to be limited to isolated areas where it could be contained,” Smith said. “We know now that is no longer true.  We need to take seriously the effort to devise more effective means of addressing this and all neglected tropical diseases.

“I have called this emergency hearing today, during recess, to address a grave and serious health threat which has in recent weeks gripped mass media attention and heightened public fears of an epidemic – the Ebola virus. What we hope to gain from today’s hearing is a realistic understanding of what we are up against, while avoiding sensationalism,” Smith said. Click here to read Smith’s opening remarks.

Smith is the author of the End Neglected Tropical Diseases Act, HR 4847, to establish that the policy of the United States is to support a broad range of implementation and research and development activities to achieve cost-effective and sustainable treatment, control and, if possible, elimination of neglected tropical diseases. He plans to explicitly include Ebola in a redrafted bill that will be introduced in the coming weeks.

“We do not view Ebola as a significant danger to the United States because it is not transmitted easily, does not spread from people who are not ill, and because cultural norms that contribute to the spread of the disease in Africa – such as burial customs – are not a factor in the United States,” said CDC Director Dr. Frieden. “We know how to stop Ebola with strict infection control practices which are already in widespread use in American hospitals, and by stopping it at the source in Africa.”

Frieden said, “The current outbreak in Guinea, Liberia, and Sierra Leone is the first that has been seen in West Africa and the biggest and most complex Ebola outbreak ever documented. Stopping outbreaks where they occur is the most effective and least expensive way to protect people’s health. While this tragic outbreak reminds us that there is still much to be done, we know that sustained commitment and the application of the best evidence and practices will lead us to a safer, healthier world.”

Pablos-Mendez of USAID said the current total USAID funding dedicated to the Ebola response in West Africa is $14.55 million since March 2014 when the outbreak was first reported.

“The ongoing Ebola outbreak in West Africa is the largest and most-protracted ever recorded and it shows no signs of waning as the affected countries have been unable to control the outbreak on their own. Since December 2013, Guinea, Liberia, Nigeria, and Sierra Leone have reported more than 1,600 confirmed probable and suspected cases. New cases continue to be recorded indicating that the outbreak – which has an overall fatality rate of 55%– has not been contained,” Pablos-Mendez said. “The outbreak also reminds us that infectious diseases require prevention efforts and global vigilance, as they know no borders. It is a humanitarian imperative and national security necessity to contain the current Ebola outbreak as quickly as possible.”

Deputy Asst. Secretary of State Williams said the State Department has been keeping in close contact and coordination with the governments of all the affected countries, and has closely monitored their operational plans to combat the viral outbreak.

“U.S. embassies in the affected countries have disseminated security messages, including the CDC’s warnings, to resident and traveling U.S. citizens,” Williams said. “We continue to take steps to educate citizens about the virus, dispel rumors, and provide information on preventive methods.”

“As an organization, we have worked to contain the growing Ebola crisis in Liberia and were devastated to discover that two of our personnel had contracted the deadly virus while trying to assist others,” said Isaacs.

“The global impact of Ebola has yet to be fully realized,” said Glover. “In the developing world it has the potential to destabilize entire countries while creating widespread and even regional insecurity. It will have a devastating impact on transportation hubs, economies, healthcare systems and governments.”

Smith has held numerous hearings on health threats around the world, including hearings onsubtropical diseases in June 2013, “superbugs” in April 2013, hydrocephalus in August 2011, malaria in December 2011, Alzheimers in June 2011 and other global health hearings, among others.‎‎