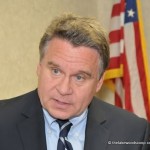 Congressman Chris Smith (NJ-04) called on the Federal Emergency Management Agency (FEMA) to include other areas of New Jersey hard-hit by Hurricane Irene that were not named when President Obama made his federal disaster declaration on Aug. 31.

The congressman spearheaded the N.J. congressional delegation letter in support of a presidential declaration of a major disaster area for the entire State of New Jersey. In response to the partial declaration, Smith continues to push FEMA regional officials in New York as well as officials at their headquarters in Washington for a declaration that includes all counties, especially Monmouth, Ocean, Mercer and Burlington. Such a declaration means residents and local governments impacted by flooding can at least begin to access FEMA programs.

In a letter Thursday to FEMA Region II Director Lynn Canton based in New York, Smith detailed storm damage to counties in his district, which spanned from the flooded Delaware River to the Atlantic Ocean.

“I am deeply concerned and disappointed that several counties in my district that were severely impacted by flooding – catastrophic in some neighborhoods – from Hurricane Irene have not yet been included in the President’s disaster declaration,” Smith wrote. “It is my understanding that FEMA is currently continuing its assessment of damage in New Jersey and will be adding additional counties to the original list released August 31, 2011. As damage evaluation continues in New Jersey, I would like to bring to your attention the significant damage I viewed in my district, which includes large sections of Monmouth, Ocean, Mercer, and Burlington counties.”

In the letter, Smith cited specific examples. He has told FEMA that the devastation is not limited to those neighborhoods and the effect of the storm is widespread. TLS.