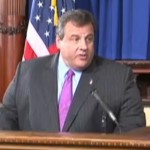 Even if nothing changes, Tuesday’s election would be a historic win for Republicans. Gov. Chris Christie said in a recent radio interview that decades of history show governors lose seats in their first midterm election. But he said this year will be different. “Over the last 48 years, every governor at the midterm of his first term or her first term has lost seats in the Legislature, with the exception of Jim McGreevey in 2003, who was working off a newly gerrymandered map,” Christie said Oct. 26 on WCBS 880 AM.

“But despite that we’re going to make history. You will not see the Republican party lose seats … in two weeks. And my prediction is you’ll see us gain seats,” he said.

All 120 seats in the state Legislature are on the line Tuesday. Of those, Democrats hold 71 and Republicans hold 49.

As Tuesday approaches, Christie — and his party — have repeated in public speeches and internal memos the claim about historical midterm losses.

McGreevey picked up six Democratic seats in the state Legislature in 2003. He was the first governor to gain seats since Robert Meyner, a Democrat, did in the 1950s.

This trend is not unique to New Jersey.

Since Harry Truman became president in 1945, the president has lost seats in Congress in the midterm of his first term, except George W. Bush in 2002. More in Politifact.