Local and County health officials are investigating a suspected case of Measles, as well as confirmed cases of Pertussis and Varicella in Lakewood, TLS has learned.

The suspected Measles patient, 27, told TLS he fell ill several days ago, and noticed a large rash break out on his body (pictured). He had himself checked out by doctors, who conducted testing. The patient says he returned from overseas about a week prior.

Today, the patient told TLS he was asked to return to a health facility for further testing.

The Ocean County Health Department told TLS they are investigating the suspected Measles case, and working closely with health providers, as well as with local and State health officials.

This afternoon, CHEMED confirmed to TLS they are assisting the health agencies with the investigation. 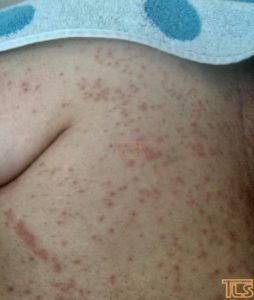 “CHEMED would like to make the community aware of a suspected case of measles in Ocean County and confirmed cases of Pertussis and Varicella,” CHEMED said. “Symptoms of measles include fever, coughing and a rash that usually starts on the face.”

The health facility added, “There is a very real danger for those who are not immunized, such as infants, and those who are immuno-compromised, who may come in contact with an infected person. A non-immunized pregnant women could result in exposure to the fetus.

CHEMED would like to remind everyone of the vital importance of being up to date with immunizations to protect you and our community.”