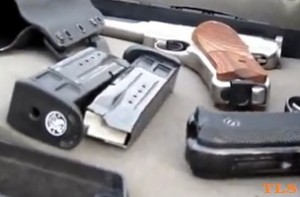 “Today’s action is a long overdue but welcome step toward the goal of preventing gun violence in New Jersey. I look forward to seeing the full Senate approve this legislation,” said Greenwald (D-Camden/Burlington). “The data show that a 10-round limit will reduce high-capacity magazines in the hands of criminals. Moreover, these limits will save the lives of innocent victims and law enforcement officers who are confronted by criminals or unstable individuals. That’s why law enforcement leaders from around the country have supported 10-round limits on magazine capacity. I urge the Governor to put New Jersey’s communities before presidential politics and sign this bill into law as soon as it hits his desk.”

Under current law, magazines capable of holding a maximum of 15 rounds of ammunition are legal in New Jersey. The bill (A-2006) would reduce the lawful maximum capacity of ammunition magazines to 10 rounds. The limit proposed by the bill would bring New Jersey’s laws in line with the magazine limits contained in the original 1994 assault weapons ban.

The bill has been part of the Assembly Democratic gun violence prevention effort. A video of Majority Leader Greenwald discussing the magazine capacity legislation can be viewed here: https://vimeo.com/89617673

“Large capacity magazines were used in the mass shootings in Arizona, Columbine and Virginia Tech. They serve no other purpose but to allow a shooter to shoot longer without having to reload. In the debate over gun safety, saving lives should always come first,” said Quijano (D-Union).

“This bill is not meant to restrict law-abiding gun owners, but rather make it more difficult for individuals intent on hurting others to unleash the type of carnage we saw in Newtown,” said Eustace (D-Bergen/Passaic). “When defenseless children are slaughtered, I think it is time to reevaluate our priorities.”

“We have seen the level of damage that these high-capacity magazines can cause too many times. We may not be able to stop an individual who is intent on gunning down innocent people, but we can at least try to limit the extent of the damage that they can inflict,” said Johnson (D-Bergen).

“High-capacity magazines allow weapons to fire longer without being reloaded. They are used in mass shootings for this very reason,” said Jasey (D-Essex/Morris). “This ban alone will not end gun crime, but it can help save lives. I think we can all agree that is worth pursuing.”

The bill is in response to the 2011 mass shooting in Arizona which left six people dead and 13 others injured, including Arizona Congresswoman Gabrielle Giffords. The shooter used a large capacity ammunition magazine. High-capacity magazines were also used in Columbine High School, Virginia Tech, Fort Hood, Texas and the Pettit & Martin Law Offices in San Francisco.