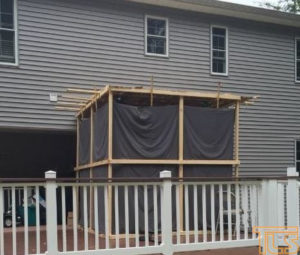 Agudath Israel of America’s New Jersey Office praised the Homeowners’ Association of the Enclave senior community in Lakewood for its decision regarding the right of its residents to build Sukkahs in the community. The association stated that residents could build Sukkahs as long as they followed certain guidelines that take into account the governing board’s concern about the beauty and safety of the community. Agudath Israel of America’s New Jersey Office expressed its appreciation for the amicable resolution of the issue.

“We are pleased that the Homeowners Association devised a solution – amicably and outside the legal system – that simultaneously protects religious rights and the quality of life of this beautiful community,” said Rabbi Avi Schnall, director of Agudath Israel’s New Jersey Office.

Agudath Israel’s Legal Services Division, in particular attorney Larry Loigman, worked in recent weeks to ensure that the religious rights of Enclave residents were being respected, and was prepared to advocate on their behalf in any legal venue. This follows a similar situation that took place last year in a different New Jersey senior development, where a movement to ban Sukkahs was ultimately amicably resolved following the intervention of Agudath Israel and Mr. Loigman.

“The precedent is crystal clear,” says Mr. Loigman. “Religious freedom is an inalienable right in the United States, and it benefits everyone to respect that and work together, rather than fight acrimonious losing battles.”