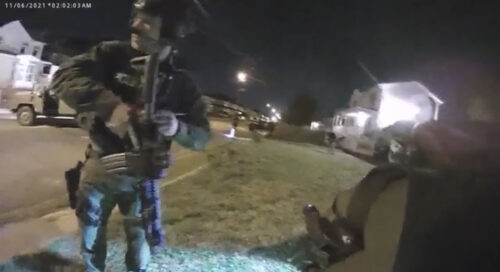 The Attorney General’s Office today released video footage from two body worn cameras, a mobile video recorder in a police vehicle, and a residential camera related to a fatal police shooting that occurred on November 6, 2021, in Long Branch, N.J.  The decedent has been identified as Mark D. Walker, II, 34, of Woodbridge, Va.

The fatal shooting remains under investigation by the Office of Public Integrity and Accountability (OPIA). The recordings are being released in response to an OPRA request and pursuant to policies established by the Attorney General’s Office in 2019 that are designed to promote the fair, impartial, and transparent investigation of fatal police encounters. Investigators met today with Mr. Walker’s family to review the recordings.

According to the preliminary investigation, on Nov. 5 at approximately 5:10 p.m., members of the Monmouth County Prosecutor’s Office were attempting to execute a residential search warrant at 274 Chelsea Avenue, Apartment 1, in Long Branch. As county detectives were executing the warrant, Mr. Walker shot one of the detectives in the lower leg. The detectives repositioned outside of the building, and Mr. Walker barricaded himself inside with an infant child. Members of the Monmouth County Emergency Response Team were deployed to the scene.

Around 2:00 a.m. on Nov. 6, a fire erupted in the apartment, and Mr. Walker fled the building, holding the infant in his arms. Mr. Walker fired several rounds from a handgun at officers, striking a BearCat armored personnel vehicle parked in the roadway. Three members of the Monmouth County Emergency Response Team returned fire, hitting Mr. Walker, who was later pronounced dead at the scene. The infant was not injured.