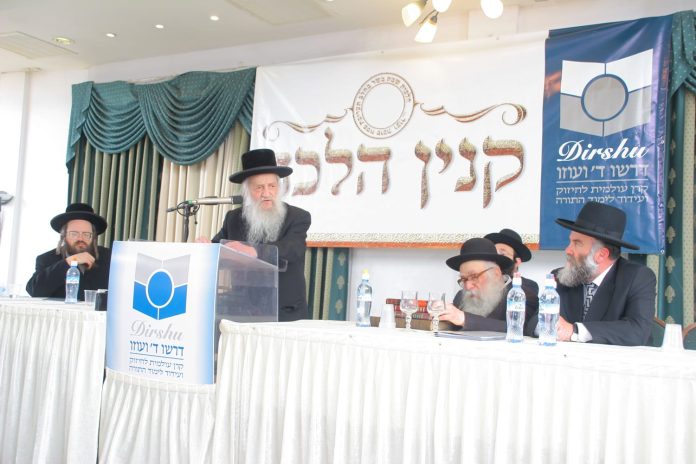 The Teddy Hall at the Binyanei Haumah Convention Center in Yerushalayim will look like a beis medrash in the middle of Simchas Torah this coming motzoei Shabbos Parshas Vayigash.

Kinyan Halacha is designed for an elite group of mature talmidei chachamim who desire to undergo a grueling, five-and-a-half year learning and testing program to become morei horaah, poskim who can pasken on the Orach Chaim and Yoreh Deah orders of Shulchan Aruch associated with semicha.

Kinyan Halacha is a rigorous program to which 3,000 avreichim applied more than five-and-a-half years ago. From among that 3,000 that applied, only 1,800 avreichim were deemed worthy of being accepted into such a demanding program. From that 1,800 only 400 persevered until the end becoming true bekiim in halacha and achieving outstanding results on very rigorous, comprehensive tests on hilchos Shabbos, Niddah, bassar v’chalav, taaruvos, safek sefeikah, melicha, shemitta v’yovel, brachos, sefer Torah, tefillin and mezuzah, eiruvin and ribbis. All the material was learned by beginning with the Gemara, proceeding through the Rishonim, the Tur and its mefarshim, then Shulchan Aruch with its mefarshim until the poskim of our time.

Rav Shlomo Gans, a supervisor of the Kinyan Halacha program, said, “This program is a unique halacha program that does not exist anywhere else. Both in the amount learned, depth and breadth and the support that it has received from the Gedolei Yisrael.”

There will be siyumim in Eretz Yisroel, England and America, to celebrate the accomplishments of this group of special talmidei chachamim who have invested their lifeblood into becoming true baalei horaah.