Will Christie Enter The 2012 Presidential Race Or Not? 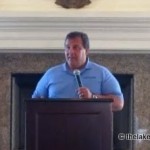 [Politico Video] UPDATED: If the Governor will cave into mounting pressure from donors trying to convince him to change his mind and enter the 2012 Presidential race, is yet to officially be determined. Until then, here’s a video with numerous Television interviews where Christie says no, no, and again, to the run.

UPDATE: 5:55 PM. Chirstie has officially told donors this afternoon, that he will not be running in 2012.