Where Have All The Geniuses Gone? 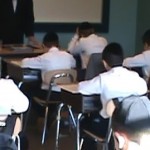 By Zvi Zobin for TLS. Even though there are no signs of a “spring fever” running against our educational system, voices are rising up against certain aspects of it. Schools have long been accused of stifling the creativity and individualism of the child. Standardized curriculums and standardized testing force the child to be ‘inside the box’ and inhibit the ability to be and think ‘outside the box’.

Certainly, standardized testing is the antipathy of true education, denying the student of any recognition as an individual with unique abilities. And even with their seemingly advanced and sophisticated educational psychology, standards of of the secular world are still falling.

At one time, we Jews looked down on secular education as the ‘new kids on the block’. We have been into education for thousands of years, whereas secular public education for the masses has only been around for a few hundred years.

Education has always been our top priority and we have succeeded in producing an educated population of amazingly high standards. Originally, parents taught their own children. However, over 2,000 years ago, the Greek oppression so ravaged the People of Israel, that Rabbi Yehusha ben Gamla was forced to initiate public education and he decreed that towns should open schools for the education of Jewish boys. Mothers continued to educate their daughters until the some 150 years ago when the wave of Enlightenment prompted Sarah Schenirer to introduced schooling for girls.

Until before WWII, in Europe, boys were educated either in small chedorim or parents hired private teachers for their children. Now, after WWII, the norm is for children to go to schools with large classes –perhaps 20 – 30 children in a class.

However, this has been accompanied by the disappearance of a well-known phenomenon – the highly gifted child. Previously, every generation had its scatterings of boys who knew much of the Talmud when they were 8 years old, entered Yeshiva Gedolah when they were 10 years, started to deliver lectures when they were 14 years old and became community leaders by the time they were 18.

Where are they nowadays?

Sadly, Jewish education has integrated within itself many of the characteristics of secular education – with its accompanying deficiencies. 80 years ago, the idea of ‘standardized testing’ or forcing a child to remain
with children of his own age even though he was clearing developing faster than his contemporaries, would have been ‘laughed out of court’. Every parent and teacher looked out for a child who could develop into one of the luminaries of the next generation. Nowadays, the plague of oversized classes does not permit the teacher to relate to individual children in his class and standardized testing relieves him of the responsibility to relate fully to each and every child in his class.

One important point is that many people defend the present-day system as being the “massorah”. This is very wrong.

Before WWII, Torah – including Gemorah, was never taught the way it is taught nowadays.

Many Gedolim of the previous generation and our own generation protest(ed) that the way Gemorah is taught nowadays is incorrect and will not produce real Talmidei Chachomim.

In Europe, most junior schools finished at 12.00 or 1.00 pm and the rest of the time the children played. Nowadays, children are being taught to read at increasingly earlier ages, often when the child is not neurologically ready for learning these sophisticated skills, and the long days and stressful curriculum lead many to precocious burnout.  However, because of the traditional high regard which educators have in the eyes of parents, criticism is abhorred – even constructive criticism – allowing many of those in education to be smugly self-satisfied with their educational achievements. This leads to an almost global absence of quality-control both of the teachers and their methods. Educational institutes tend to bask in the glory of their relatively few successes and ignore the growing numbers of their failures.

One answer is to have smaller classes. But this entails hiring more classes and having more classrooms. Actually, the payroll is only a small part of the costs in running a school. Services such as electricity, heating and lighting, maintenance and insurance drain huge sums from the school’s financial resources. Educational ancillaries such as private tutors and therapist add to the burgeoning cost of running a school. Of course, in the old days, Jewish schools did not need to be multi-storied emporiums of marble and hi-tech equipment and fees went from the parents directly to the teachers.

So what can we do?

Home-schooling is not a viable option in many places, such as Israel, the UK and Canada. However, parents do have the right to demand quality-control over the teachers to ensure that ineffective teaches are weeded out, and they have the right to demand that the curriculum should be down-graded so that schools become less stressful. But these do not solve our problem with gifted children.

Somehow – and I do not have an easy answer – we need to introduce into our educational system the ability to give the gifted child the individual environment which will enable him to develop into one of our future leaders.