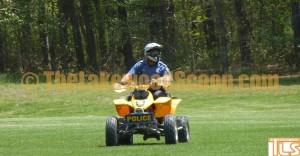 PHOTO: A wanted suspect fled from police this afternoon, but he was soon apprehended after attempting to hide in a dumpster, sources say.

At about 1 PM, Brick Police reportedly attempted to stop the suspect on Cedarbridge Avenue following a shoplifting incident in Brick. The suspect fled from police and into the nearby woods and construction zone, police say.

Multiple officers from Brick and Lakewood Police joined the search for the suspect, who was also wanted on other warrants, police confirm to TLS.

police k-9 and ATVs were used to try and locate the suspect – who police believed may have fled into the nearby Lake Shanendoah park.

After about 45 minutes, a Brick Police unit located the suspect hiding in one of the dumpsters at the construction site, police say. He was immediately taken into custody. [TLS-52/TLS-CCP]

The search was initially reported on our News Alerts (@lakewoodscoop).