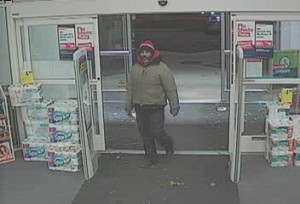 Last week, police released the photo of a suspect who robbed a taxi cab driver in the area of Martin Luther King Drive and Center St on March 13, 2014.

Today, Det. Mike Cavallo received a call from a concerned citizen who stated that a man walking on Ashley Avenue matched the man in the picture that they saw on social media. (A comment in that story on TLS shows another reader had also identified the man as a Tent City resident).

At the time, Flores was found to be in possession of drug paraphernalia and was subsequently arrested.

As the investigation continued the Detectives were able to establish that Flores was in fact responsible for the robbery.

Phillip Flores was charged was Robbery and Possession of Drug Paraphernalia. Bail was set in the amount of $10,000 without a 10% option. He was later transported to Ocean County Jail. [TLS]