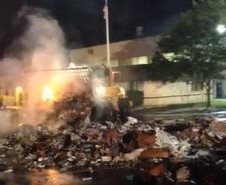 The fire broke out at about 9:15 PM and prompted a General Alarm to be hit out.

All of Lakewood’s fire companies responded, along with Lakewood EMS, as well as mutual aid from Brick Township Fire Department, Brick Township Police EMS and the Ocean County Fire Coordinator.

Front end loaders were used to remove trash from the building, which was then hosed down.

One person was transported for smoke inhalation, officials said.