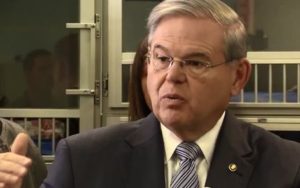 U.S. Senator Bob Menendez today led a rally for common sense gun safety reform with Congresswoman Mikie Sherrill (N.J.-11), dozens of concerned New Jerseyans, students, local leaders and gun safety advocates in which they called on Majority Leader Mitch McConnell (R-Ky.) to end his obstruction and allow the Senate to vote on key legislation that the majority of Americans support. The call to action comes just days after a gunman armed with an AR-15 assault rifle went on a shooting spree in West Texas, killing seven and injuring dozens, and a bloody August ended with 53 lives lost in mass shootings.

“How many more acts of mass murder will it take before Senate Majority Leader Mitch McConnell puts the lives of our people ahead of gun-maker profits?… It’s time for action in the Senate. Leader McConnell could hold a vote today. He could put this country on a safer path today. He could stand up to the NRA today,” said Sen. Menendez. “We know that no single law can stop every tragedy, nor can we cure every heart of hatred, but we know this challenge can and will be overcome because the American people are with us. So, we must not give up. We must keep up the fight, because every day that goes by without action is another day until the next mass shooting.”

While Sen. McConnell refuses to bring any meaningful gun safety bill for a vote in the Senate, the House has already passed universal background checks and plans to advance several pieces of legislation, including a ban on high-capacity magazines, which Sen. Menendez authored, when Congress returns from the summer recess.

“I am sending my kids back to school tomorrow where, along with math and social studies, they will learn how to hide from active shooters,” said Congresswoman Mikie Sherrill (N.J.-11). “And despite repeated mass shootings and attacks of gun violence across the nation, Senate Majority Leader Mitch McConnell refuse to take action to keep my kids and children across the nation safe. As a veteran, I am well versed in weapons of war and I join the overwhelming majority of Americans who believe we must do something to stop this gun violence epidemic. The House has acted, passing multiple bills now stalled in the Senate. I’m grateful to Senator Menendez for leading the way on gun safety in the Senate, and we will not stop working to make our communities safer.”

High-capacity magazines have been used in many of the nation’s most high-profile mass shootings, including recently in Dayton, Ohio, where the mass shooter used a high-capacity rifle equipped with a 100-round drum magazine to enable him to fire 41 rounds in 30 seconds, killing nine and injuring 27 others. Experts believe that restrictions on the magazine capacity could reduce the death toll by giving potential targets precious seconds to escape while the shooter reloads.

“High capacity magazines are notorious for making devastating shootings even deadlier by allowing a shooter to fire more rounds without pausing to reload,” said Christine McGrath of the group Moms Demand Action. “It’s time for Congress to confront the mass shootings and daily gun violence in this country by strengthening our gun laws. We are grateful for Sen. Menendez’s leadership in introducing this important legislation.”

A Quinnipiac University Poll released last week found 72 percent of voters believe Congress needs to do more to reduce gun violence, including half of Republicans and overwhelming majorities of Democrats and independents. According to the survey, 93 percent support universal background checks, 82 percent support requiring a license to buy a gun, 80 percent support a “red flag” law, and 60 percent support a ban on assault weapons.

In addition to Sen. Menendez’s ban on high-capacity magazines, the House Judiciary Committee is considering separate measures the senator supports to create a federal “red flag” law and to prohibit those convicted of misdemeanor hate crimes from possessing firearms.

The full House passed universal background checks in February, but Sen. McConnell has blocked the bill from coming to the Senate floor for a vote.

“My condolences and prayers go to the families and friends of mass shooting victims in Odessa and Midland,” said Congressman Donald Payne, Jr. (N.J.-10). “I have been a strong supporter background checks before anyone can purchase a gun. A similar background check law in Texas prevented the murderer from purchasing a gun. Unfortunately, he found another way to get one. That’s why background checks need to be mandatory for all gun purchases, whether they are bought in a gun store or gun show. We need to keep guns out of the hands of criminals and stop these near constant attacks on American citizens.”

“I applaud Senator Menendez on his initiative to regulate assault rifles by limiting the amount of ammunition a gun can hold to ten rounds,” Essex County Executive Joseph DiVincenzo. “It is disheartening to learn—on an almost daily basis—about another mass shooting in which innocent people become victims. Assault rifles don’t belong in the hands of civilians on our streets. The Senator’s legislation is a common sense first step to making our communities safe again.”

“New Jersey has been at the forefront with laws that could help curtail senseless gun violence and suicides,” said Montclair Mayor Robert Jackson. “Just this past Sunday the state’s ‘red flag’ law went into effect. Today, Senator Menendez is here to urge the U.S. Senate to pass S.447—the Keep Americans Safe Act—and to encourage Congress to consider other common sense laws that may help stem the carnage America is witnessing with greater frequency.”