VIDEO: Governor Christie On Taxes: We Need To Wake Up 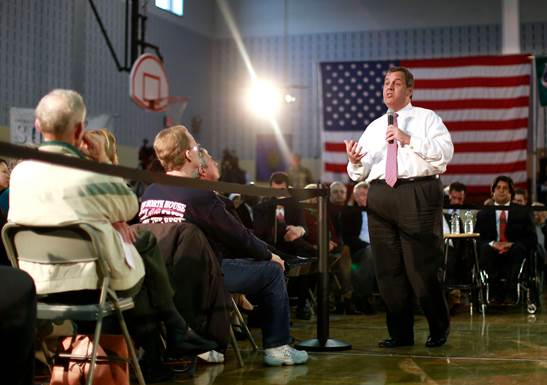 Governor Christie: A lot of these tax burdens on these businesses, we created them to say listen, we don’t have the money to create jobs in the private sector so as a result we’ve seen at least in part 155,000 new private-sector jobs created in the state. So that was a decision that was made jointly by me and by the legislature, it was the only time the legislature has agreed to cut taxes on anything over the last five-and-a-half years, has been on that particular program. So it amounts to about $400 million a year over five years so it’s not 2.3 billion in one fell swoop, that’s been phased in over time.

So it was a policy decision that I advocated for and supported to try to help when we were at 10 percent unemployment and I think that it’s helped. I don’t think it’s the only cause of why, cause there are other trends, national trends help and other things that happened in the state, I think, help. But that’s been part the problem, has been tax structure in the state is too high and employers are leaving in for instance, you know you may have read in the past month and a half or so that Mercedes-Benzes USA is leaving New Jersey. Now Mercedes-Benzes USA has had their American headquarters in New Jersey for forty years. Since 1972 and they are now leaving and they’re going to Georgia and they’re leaving as the CEO said for one major reason; it is too expensive for them to do business here. They were up in Bergen County and they just could no longer afford it. It did not make fiscal sense. That’s a thousand really good paying job that are going to leave the state. And so we need to be sensitive to that.

We need to wake up. You know the idea any longer as a lot of the Democrats in the legislature will tell you, well people don’t leave because it taxes. Then why is Mercedes-Benzes USA leaving? Why did ten thousand millionaires leave, just last year? And why in the five years before I became governor did seventy billion dollars in wealth leave the state. Not according to me but according to an independent Boston College study. These people are leaving because they are saying to themselves two things: it’s increasingly difficult to afford to live here and it’s impossible to afford to die here. Because by the way remember this, we’re one of only two states in America that has both an estate tax and an inheritance tax. Us and Maryland. We’re it, that’s it. Estate tax and inheritance tax, so when you make the money whether you’re a public sector worker or private sector worker we tax you. And then, if you don’t spend all your money and you invest some of it, we tax you on your capital gains and your dividends. Then, if you take some of that money out and you spend it, we charge you a sales tax. If you don’t spend it and you keep it in the account and we’re taxing your capital gains and your dividends, then when you die at the moment you die, we take our share. Then, when you give it to your son or daughter or wife or husband we take more then, like in the transfer we take more. We take it from you when you die and then as it moves magically over to your heir, we take more from them. We take more money from you at every turn. By the way, if you decide to leave, if you have the temerity to decide to leave and you sell your house, you didn’t know when you bought your house that I was your partner.

Now, granted, I didn’t put any money in. Granted, when you painted the house I didn’t help you. When the roof leaked I didn’t get up there and help you with it. You know when the plumbing burst, I didn’t come help pay the plumbers bill. I’m sorry, but here’s the good news for you. Because of Governor Jim McGreevy we have something called the realty transfer tax. Sounds relatively benign right? Realty transfer, I don’t own realty, it doesn’t matter to me. Oh yes you do, if you own your house you do. And you find out when you sell your house, and you get that statement and you’re expecting a check of a certain amount because you know how much your mortgage was and you know how much you sold the house for and you know how much you’re paying your realtor. So you think okay, then I’ll have this much. But then you go wait a second, excuse me, the check’s not correct.

Oh no it is, Governor Christie came in for his share. What did the governor have to do with my house? Nothing, but I take part of it. That’s the craziness of this state. Every chance they can they get in your pocket for more money. So, the Exxon settlement is a good settlement. Now listen, the Attorney General makes these decisions, so I can’t take credit for the good decision either, because the Attorney General makes these decisions and I don’t interfere with the Attorney General. But what I will tell you is, they’re going to have to clean everything up no matter what it costs, and we get 225 million dollars on top of it because they were bad enough to have done it in the first place. And on the tax cuts, you can argue that back and forth, but I think it contributed to us creating more private sector jobs which is increasing revenue in this state. And I think that’s a good thing, on top of the fact that 150,000 more families have a member of their family working than not working. And I think that’s good also for the fabric of our society too.