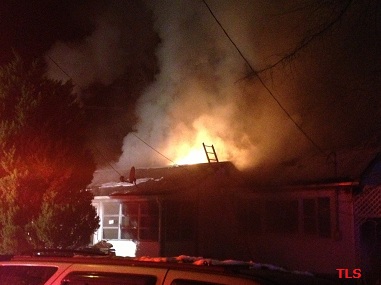 VIDEO: A fire which broke out in a vacant home last night, left the home severely damaged, Fire Chief Rodney Youmans tells TLS. The Manetta Place fire was first called in by Patrol Officer Chase Messer who noticed the fire while patrolling the area at about 11 PM, Chief Youmans says.

A General Alarm was hit out, prompting the response from all of Lakewood’s Fire Companies.

The home was vacant because it was under construction, Youmans says.

The large fire was battled for about an hour before being brought under control.

Chief Youmans says the fire did not appear suspicious at the time, but it is under investigation by the Fire Marshal’s Office. TLS-CCP/Video Credit: Dave Rice/Photo Credit: ‘Eyewitness Photo’ for TLS.