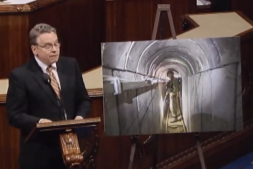 “The facts on this round of Hamas attacks were clear from the start and follow a long-established pattern,” said Smith, a senior member of the House of Representatives Foreign Affairs Committee and co-chair of the Bi-Partisan Anti-Semitism Task Force. “It’s high time our government sent a much more powerful and unambiguous message: that the U.S. fully supports Israel’s right to defend itself. The administration should emphasize that Israel’s actions in its own defense are legal, that they are right, and that the U.S. stands with Israel, without any ‘ifs,’ or ‘buts,’ or ‘so long as,’ or any other qualifiers
.”(Click here to read Smith’s floor statement on the attacks)

“From its origins to the present day, the Hamas movement has been poisoned by anti-Semitism – the murderous nature of this evil has not diminished – it has gotten worse,” Smith said. “Jews today continue to die because of it. Five IDF soldiers were killed yesterday, 48 have died since July 8 – of course we are saddened by these deaths, as well as those of all who have died in the conflict. We must not forget that it is anti-Semitic hatred that is driving this conflict and causing all of these deaths.

“And so today I call on President Obama to give Israel our government’s full support and to make unmistakably clear our government’s position that Israel, in its response to Hamas’s unprovoked attacks, is fully in the right to defend itself, including to search out and destroy Hamas terror tunnels and those who launch rockets at Israel.” (Click here to read Smith’s remarks on the Hamas Charter in the Congressional Record)

Smith chaired Congress’s first hearings on anti-Semitism in the 1990s, and his first trip abroad as a member of Congress in 1982 was to the former Soviet Union, where he fought for the release of Jewish “refuseniks.”

Smith, who is Chairman of U.S. Helsinki Commission and an Executive Member of the Tom Lantos Human Rights Commission, chaired the landmark 2002 hearing, “Escalating Anti-Semitic Violence in Europe.” He has worked to put the issue of anti-Semitism at the top of the Organization for Security and Cooperation in Europe (OSCE) agenda, which resulted in the OSCE adopting new norms for its 56 member states on fighting anti-Semitism in 2004, and a series of high-level conferences on combating anti-Semitism.

Smith is the author of the provisions of the Global Anti-Semitism Review Act of 2004 that created the Office to Monitor and Combat Anti-Semitism within the U.S. State Department. [TLS]