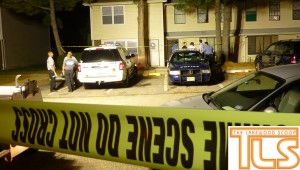 VIDEO of the scene in Coventry Square where authorities today are continuing their investigation to what appears to be a homicide, according to sources.

“The Lakewood Police Department in conjunction with the Ocean County Prosecutors Office and Ocean County Sheriff’s Department CSI Unit is investigating the suspicious death of a 46 year old Lakewood Man.

On Sunday October 12th, at approximately 5:30 a.m., Officer Brandon Burkhardt responded to a Coventry Drive home in response to an unresponsive male.

At this time, we are speaking to several individuals in an effort to gather information pertaining to the victims activity in the hours prior to his death.