UPDATE: What We’ve Seen So Far From Mueller’s Testimony 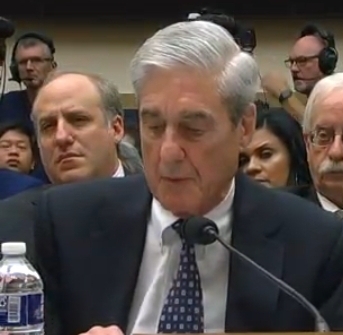 After three hours of Robert Mueller answering questions before the House Judiciary Committee, and another 3-hour questioning period upcoming before the Intelligence Committee, one thing has become clear so far: the hearing has been a disaster for Democrats, especially those clamoring for the impeachment of President Trump.

Under intense questioning from both Democrats and Republicans, Mueller often sounded shaky as he gave short, curt responses to lawmakers from both parties, declining to give extended answers and referring lawmakers back to his publicly released redacted report.

Democrats repeatedly pushed Mueller to say that President Trump is guilty of obstruction of justice for alleged attempts he made to fire the Special Counsel, but, while confirming the incidents, Mueller gave little more information, sending Democrats back to his written report time and time again. This visibly frustrated several Democrats on the panel who were hoping, perhaps even expecting, a Mueller appearance in which he would validate all their claims against the president.

On the other side of the aisle, Republicans incessantly hammered away at the credibility of Mueller’s report and the manner in which he conducted his investigation. As with questions coming from Democrats, Mueller declined to respond to most Republican lawmakers directly, instead telling them to read his report and declining comment on many questions. But Republicans managed to fire multiple shots at Mueller in which his credibility did seem to come under fair criticism.

What is most perplexing from the first hearing is how little time was spent on what Mueller’s testimony should have actually been about – Russian interference. Instead, Republicans and Democrats both decided to focus on advancing their own political agendas. It is possible, although not likely, that this will change in Mueller’s testimony before the House Intelligence Committee, but so far the hearing has been political spectacle more than anything else.