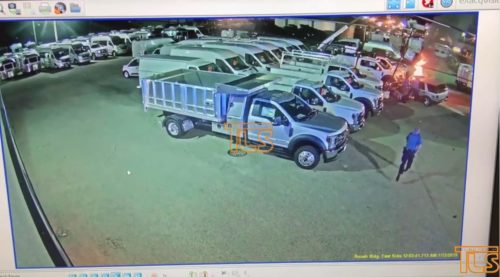 The Lakewood police officers who pulled an injured man from a burning vehicle, were named today.

At approximately 10:55 PM on Friday evening, Ptl. Caitlyn Kicki #383 was on patrol and observed a smoke condition in the Larson Ford parking lot located at 1117 Ocean Avenue. Upon pulling into the lot to investigate, she was met by a witness who reported seeing a vehicle just crash into multiple parked vehicles at a high rate of speed, and that the driver was injured. As Officer Kicki neared the vehicle, she discovered that it was in fact on fire.

After requesting the Lakewood Fire Department and Emergency Medical Services, she approached the vehicle and observed that the driver was unconscious and was suffering from a significant head injury. Attempts to open the door were unsuccessful due the the damage incurred during the crash. She then attempted to pull the driver through the window, but was unable to establish a solid grip due to the wreckage.

Back-up Officers Michael Grant and Daniel Spagnuolo arrived, and the vehicle was now fully engulfed in flames. Kicki, Grant, and Spagnuolo were able to remove the driver through the driver’s side window.

The driver, identified as 29-year-old Oscar Martinez Tapa of Lakewood, was later airlifted to JSUMC. It was later determined that despite the severity of the injury, the driver was not facing a life-threatening condition.

The cause of the accident is still under investigation. Anyone with information is urged to contact Officer Richard Stanick of the Lakewood Police Department Traffic Safety Unit at 732-363-0200.