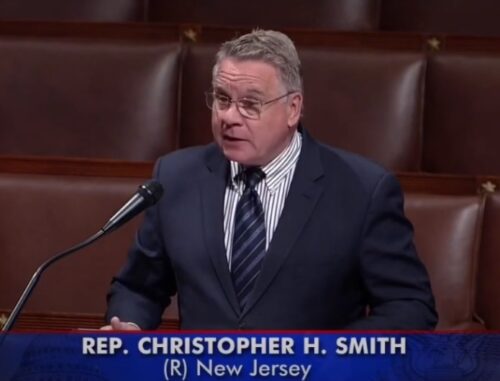 President Joe Biden on Monday will sign a $1.2 trillion bipartisan infrastructure bill into law in a Monday afternoon ceremony that will be attended by both Democratic and Republican lawmakers who supported the bill. However, there will be one notable exception: Rep. Chris Smith, who voted to approve the legislation, but is now under fire from fellow Republicans and former President Trump for his vote.

Rep. Smith, whose 4th District includes Lakewood, was one of just 13 Republicans in the House of Representatives to vote in favor of the bill. The legislation includes historic investments in roads, bridges, ports, water, and rail, as well as billions to expand the nation’s broadband and water infrastructure.

Smith has also come under fire since his ‘yay’ vote, most notably from Donald Trump, who pledged in a statement to support primary challengers to Smith and other Republicans who voted for the bill. It should however be noted that Republican Rep. Jeff Van Drew also voted to pass the infrastructure bill, yet Trump did not mention him in the statement.

“Above all, this legislation is necessary to better ensure the safety of the people in my district, New Jersey, and the nation,” Rep. Smith told TLS. “Originally, the two major bills were scheduled to be voted on in the House on the same day—Friday, November 5th —but then only the infrastructure bill actually came to the House floor. This created a great deal of confusion and misunderstanding. Many people appear to have been genuinely misled into believing that provisions of the so-called Build Back Better legislation—pushed by President Biden and progressive Democrats—were included in the Bipartisan Infrastructure legislation. That was simply not the case. Infrastructure funding has long been recognized as critical to the U.S. economy, creating and sustaining jobs and for the safety of Americans.”