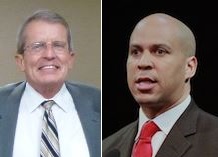 A new poll suggests voter discontent could pose a problem for the incumbent in New Jersey’s U.S. Senate race.

Poll director Krista Jenkins says the fact that Bell trails the well-known Democrat by a smaller than expected margin suggests anti-incumbency could be in play. Read more in NBC.