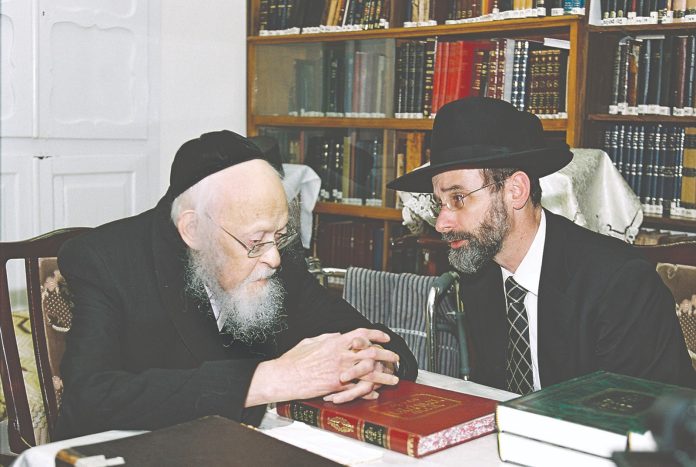 Both Europe and America will be celebrating an incredible milestone this coming week with two major siyumim that promise to have a transformative impact on the future halachic observance of their respective communities.

The first of the momentous milestone events will be the Dirshu Kinyan Halacha siyum in London on Sunday, 8 Teves/January 1 at the prestigious Hall of the Aviation Suite, Thistle London, Heathrow. The special guest speakers at the exclusive event in London will be HaGaon HaRav Aharon Schiff, shlita, Rav of the Machzikei HaDas community of Antwerp and HaGaon HaRav Yaakov Meir Stern, shlita, talmid muvhak of Rav Shmuel Wosner, a member of Rav Wosner’s Beis Din and Rav of the Kehillas Yaakov kehillah of Bnei Brak.

The following day, on motzoei Asara B’Teves, the American event will be held in the Eminence Hall in Boro Park. That event will feature special drashos from among America’s most preeminent poskim, HaGaon HaRav Yechiel Mechel Steinmentz, shlita, Skverer Dayan of Boro Park and HaGaon HaRav Hillel David, shlita, Rav of Khal Shaarei Orah of Boro Park and a member of the Vaad Roshei Yeshiva of Torah Umesorah, and HaGaon HaRav Yaakov Meir Stern, shlita, talmid muvhak of Rav Shmuel Wosner, a member of Rav Wosner’s Beis Din and Rav of the Kehillas Yaakov kehillah of Bnei Brak.

These two siyumim will be coming in the wake of a gala Kinyan Halacha siyum in the Binyanei Haumah Convention Center in Yerushalayim.

Kinyan Halacha is a rigorous program to which 3,000 avreichim applied more than five-and-a-half years ago. From among the 3,000 that applied, only 1,800 avreichim were deemed worthy of being accepted into such a demanding program. From that 1,800 only 400 persevered until the end becoming true bekiim in halacha and achieving outstanding results on very rigorous, comprehensive tests on hilchos Shabbos, Niddah, bassar v’chalav, taaruvos, safek sefeikah, melicha, shemitta v’yovel, brachos, sefer Torah, tefillin and mezuzah, eiruvin and ribbis. All the material was learned by beginning with the Gemara, proceeding through the Rishonim, the Tur and its mefarshim, then Shulchan Aruch with its mefarshim until the poskim of our time.

Before the program’s inception in 2006, when HaGaon HaRav Yosef Shalom Elyashiv, zt”l, was presented with the details of the Kinyan Halacha program by Dirshu’s hanhala led by its Nasi, Rav Dovid Hofstedter, he was extremely impressed saying, “…Learn [halacha] with Tur and Shulchan Aruch, for these are the essentials of [gufei] Torah.”

The upcoming siyumim in three continents, Eretz Yisroel, Europe and America, will be outstanding demonstrations of kavod haTorah, as Klal Yisroel, led by the Gedolei Yisroel welcome a cadre of Klal Yisroel’s future morei horaah and poskim to the fold.