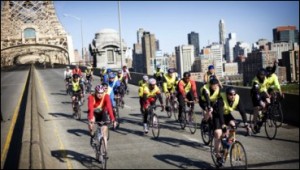 The following is via YWN. On Sunday morning, more than 30,000 cyclists will experience New York City from a perspective unlike any other: pedaling down 42 miles of car-free streets through all five boroughs, taking in views of iconic landmarks like the Empire State building, Brooklyn Bridge, historic Harlem, and the Statue of Liberty.

Taking place the first Sunday in May each year, the adventure starts in Lower Manhattan. The ride heads north through the heart of Manhattan into Central Park and continues on to historic Harlem and the Bronx, returning south along the East River on the FDR Drive. From there it crosses into Queens and then Brooklyn, where cyclists take over the highway before making the thrilling climb up—and down—the Verrazano-Narrows Bridge to Staten Island. The route is 42 miles, mostly flat except for the bridges.

The tour starts and ends at Battery Park in Lower Manhattan. Participants line up behind the start line at Franklin Street and Church Street creating a queue which extends well south beyond the World Trade Center site.

The tour runs north up the Avenue of the Americas (6th avenue) past Macy’s and past the lions of the New York City Public Library before entering Central Park. After exiting the park the tour heads north through Harlem on Seventh Avenue and then crosses into the Bronx for a short 2 mile stretch before getting back to Manhattan and onto the FDR Drive. The FDR stretch of the tour runs south through Manhattan under Gracie Mansion before crossing the East River via the Queensboro Bridge into Queens. The first major rest area of the tour is in Astoria Park, Queens.

Leaving Astoria Park the tour proceeds south through Queens before crossing the Pulaski Bridge into Brooklyn, where it winds along the waterfront, past the Brooklyn Navy Yard. The route crosses under the Brooklyn Bridge, and then up and onto the Brooklyn Queens Expressway. The tour continues on the elevated BQE before dropping down to the Belt Parkway and over the Verrazano Narrows Bridge into Staten Island.

Once in Staten Island the tour makes a stop at Fort Wadsworth for a festival, before continuing the last three miles to the Staten Island Ferry where riders can take the ferry back to Battery Park in Manhattan.

The below streets will be closed Sunday from 7:45am to 6:30pm on Sunday, May 4th for FIVE BORO BIKE TOUR: