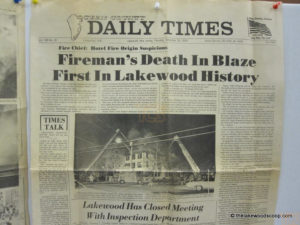 Today marks a tragic day and one of the darkest days in the history of the Lakewood Fire Department, with the death of two of their firefighters. The deadly fire occurred the night of December 23, 1976 at the Hotel Allaben, located at the northeast corner of Monmouth Avenue and Fifth Street, where the department was summoned at 1:19 AM for a working hotel fire.

Firefighters Stanley Marks and Alex Latyshev, members of Junior Hose Company No 3, were part of a crew that advanced a hose line to the second floor when conditions in that section of the hotel rapidly deteriorated and a flash over occurred trapping the men.

Firefighter Stanley Marks’ body was found the next morning on the first floor just below the area of flashover having fell through the burned away floor above.

Firefighter Latyshev was able to get to a small second floor window and was pulled down a ladder to safety. He was rush to a burn unit in Philadelphia, but would succumb to burns received during the flash over conditions on January 26, 1977.

Firefighter George Reynolds of Engine Company No1 was also on the same hose line and was able to exit the building on his own but suffered burns and smoke poisoning. He was rushed to Paul Kimball Hospital and would recover from his injuries.

A firefighter memorial was constructed in Pine Park in 1988. Every October a department firefighter service is held in memory of Stanley and Alex.

Junior Hose Company No 3 also holds a small service each Memorial Day to remember their two fallen brother firefighters. In December of 1996, the 20th anniversary of the tragedy, a service was held at town hall. A small tree was planted to serve as a living monument to these men’s spirit. An engraved plaque was also placed at the base of the tree with a written memorial.

Memorial plaques today hang in the lobby of the Municipal building.