TODAY: Lakewood Board of Education to Seek Voter Approval for School Improvement Projects 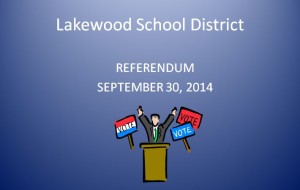 Today, Tuesday, the Lakewood Board of Education will hold a public vote on its proposed referendum project. The referendum is aimed at making considerable improvements to the District’s schools through roof repairs and replacements, and HVAC upgrades. Specifically, the referendum projects include significant replacements to the HVAC systems at six (6) District schools: Lakewood High School, Oak Street School, Spruce Street School, Clifton Avenue Grade School, Lakewood Middle School and the E.G. Clarke School. In addition, the Board is also proposing to replace the leaking and badly worn roofs at the Oak Street, Spruce Street, Clifton Avenue and E.G. Clarke Schools.

The public will also be asked to refinance the District’s lease-purchase obligations in order to issue lower interest rate bonds, thus saving the District a significant amount of money in interest payments.

“The Board of Education wishes to replace and repair the noted roofs and HVAC systems in order to ensure the future viability of its schools for future generations of students,” says a Board official. “The Board, as well as State and County officials, have inspected the roofs and HVAC systems at issue and have determined that the deteriorated condition of these facilities puts in jeopardy not only the District’s infrastructure, but the education of its students. In fact, due to the poor conditions of the roofs and HVAC systems, students have had to be relocated to different areas of the buildings in order to accommodate flooding and heating problems.”

“The cost of repairing District buildings each year continues to escalate, and totaled approximately $418,000 in the last year alone. This “patchwork” repair system results in budgeted funds being redirected towards such costs, rather than being used in the classroom for the benefit the students and their education. Moreover, the District’s insurance company has indicated that the District’s failure to address the failing roofs may result in loss of coverage.”

The total cost of the proposed referendum project is $34,697,241, of which $29,497,241 is earmarked for the building improvements and $5,200,000 for the refinancing of outstanding lease purchase agreements. If the project is approved, the State of New Jersey will contribute approximately 40% of the building improvement costs, or $11,748,704, towards the overall cost of the project. The net cost to the District, then, and the amount ultimately funded by taxpayers, would be $22,948,537. If the project is approved by the voters, the funds used would be set aside by the District specifically for the projects listed in the referendum, and would be separate and apart from the District’s regular budget. Should the referendum be defeated, the State contribution would be forfeited.

More information on the referendum may be obtained on the District’s website, http://www.lakewoodpiners.org, or by contacting Thomas D’Ambola, District Business Administrator, at (732) 364-2400.