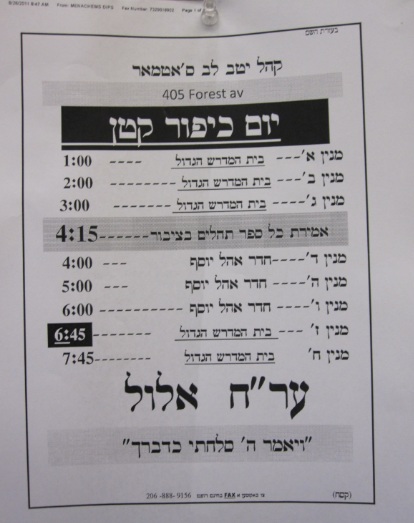 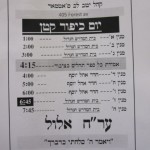 [Zmanim for Satmar – Add your Shul] The Chofetz Chaim was taking a trip from Radin to Warsaw. Whenever he took a train ride he looked for a fellow Jew to sit next to on the journey so that he could talk with him in learning. The Chofetz Chaim usually presented himself as a commoner.

Before he boarded on this occasion he noticed a Jew, and asked him if he was coming aboard that train. It came out that they were both going from Radin to Warsaw. On the train, the Chofetz Chaim found that the man was not particularly learned, but this was no matter of concern for the Chofetz Chaim. As a rule he spoke little when encountering someone he did not know, because he enjoyed learning about people’s lives. “From everyone there is something to be learned,” was his motto.

When the Chofetz Chaim arrived in Warsaw it was the day before rosh chodesh. He began to look for a shul at which he could daven Yom Kippur Katan. He walked into a Shtiebel (small Synagogue), and inquired as to whether they davened Yom Kippur Katan there. The chassidim responded that no, they don’t do so because it is not the Rebbe’s custom.

And so the Chofetz Chaim told them a story.

He told them the story of the man he met on the train on the way to Warsaw, and because of his poverty he was forced to get off at every stop along the way, make a few dollars and refuel in a manner of speaking, and then get back on the train until the next stop, until he made his way all the way to Warsaw. “And so,” said the Chofetz Chaim, “the Rebbe has the spiritual resources to carry him from one Yom Kippur to the next. But we, the ordinary people, need to make stops along the way. We need to supplicate to Hashem, ask for forgiveness for our sins in the passing month, and do teshuva so that we will gain the resources to make it through the next month unscathed. The stops along the way for this man were necessary for him to regroup and get his bearing, just as the stops at rosh chodesh are a time for us to reflect and ascend to a greater spiritual level so that we can make it all the way to our destination, Yom Kippur itself.” The chassidim stood with there mouths gaping, staring at this unknown holy man who had presented himself as an everyman off the street.