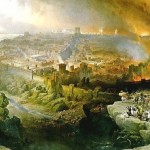 Tzom Gedaliah (Fast of Gedaliah) is an annual fast day instituted by the Jewish Sages to commemorate the assassination of Gedaliah Ben Achikam, the Governor of Israel during the days of Nebuchadnetzar King of Babylonia. As a result of Gedaliah’s death the final vestiges of Judean autonomy after the Babylonian conquest were destroyed, many thousands of Jews were slain, and the remaining Jews were driven into final exile.

The fast is observed on the day immediately following Rosh Hashanah, the third of Tishrei. In the Prophetic Writings this fast is called ‘The Fast of the Seventh’ in allusion to Tishrei, the seventh month.

When Nebuchadnetzar King of Babylonia, destroyed the Temple’s Sanctuary in Jerusalem and exiled the Jewish people to Babylonia, he allowed an impoverished remnant to remain in the land and appointed Gedaliah Ben Achikam as their Governor. Many Jews who had fled to Moab, Ammon, Edom, and other neighboring lands returned to the land of Yehudah, tended the vineyards given to them by the king of Babylonia and enjoyed a new respite after their earlier oppression.

The King of Ammon however – hostile and envious of the Judean remnant sent a loyal Jew, Yishmael Ben Netaniah, to assassinate Gedaliah. In the seventh month (Tishrei) Yishmael came to Gedaliah in the town of Mitzpa, and was received cordially. Gedaliah had been warned of his guests murderous intent, but refused to believe his informants in the belief that their report was mere slander. Yishmael murdered Gedaliah, together with most of the Jews who had joined him and numbers of Babylonians whom the Babylonian King had left with Gedaliah The remaining Jews feared the vengeance of the Babylonian King and fled to Egypt.

The surviving remnant of Jews was thus dispersed and the land remained desolate. In remembrance of these tribulations, our Sages instituted the ‘Fast of the Seventh’ on the day of Gedaliah’s assassination in the seventh month.

There is an opinion that Gedaliah was slain on the first day of Tishrei, but the fast was postponed till after Rosh HaShanah, since fasting is prohibited during a festival. Concerning this fast day, the Rabbis have said that its aim is to establish that the death of the righteous is likened to the burning of the house of our God. Just as they ordained a fast upon the destruction of the Sanctuary, likewise did they ordain a fast upon the death of Gedaliah.

When Rosh Hashanah falls on Thursday and Friday, the fast is postponed till Sunday, since no public fast is observed on Shabbat with the exception of Yom Kippur.

The fast is observed from daybreak till the stars appear at night. The cantor includes the prayer Anenu in the repetition of the Shachrit amidah. A Torah Scroll is withdrawn (from the the ark) the Thirteen Divine Attributes are said and the Passages of Vayechal are read from the Torah (Shmot 32: 14 and 34: 1-10). OU.