TLS EXCLUSIVE: Interview With Senator Singer, Some Facts On The Blue Claws Stadium 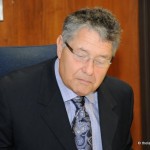 TLS EXCLUSIVE INTERVIEW: With much confusion surrounding the Blue Claws Stadium recently, TLS met with Senator Bob Singer to get some facts and to address many of our readers’ questions and concerns. The Senator, who was instrumental in bringing the multi-million dollar Stadium to Lakewood, began by saying he has no knowledge of any Committee set up to research the low rent, referring to the quote from Mayor Langert, in last night’s article from Zach Patberg of the APP, posted on TLS. “It’s an approximately $100,000 a year lease, not $25,000- I don’t know where that came from” the Senator told TLS. (Read more in extended article).

As for the renegotiating goes, they have approached the Senator to extend the lease for another 10 years on top of the current 20 year lease, after requesting to add an additional 2,000 seats to the Stadium.

The Senator also pointed out, that contrary to public assumption, no local dollars were used for the Stadium, but rather State UEZ funds, not costing the taxpayers anything. “This is not money that could have been used for our budget” he said.