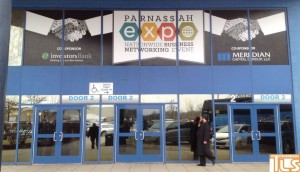 [PHOTO & VIDEO ROUNDUP] By: Shimmy Blum. On Tuesday and Wednesday, March 25th and 26th, the oversized parking lots at the New Jersey Convention and Exposition Center in Edison – the largest expo center in the Garden State – were filled to capacity, with cars bearing license plates from a potpourri of states across the nation.

Inside the massive expo hall, a steady stream of thousands of Orthodox men and women browsed the over 200 exhibition booths, attended some of the 60 workshops and panels, and engaged in one-on-one discussions that served as the launching pad for lucrative long term relationships.

With booths and other resources in every major industry, the activity spanned every aspect of the business world – and klal Yisroel. There were attendees from across the United States, Canada, Europe and Israel. Men and women of every age group, wearing every type of garb. No language, cultural – or income – barriers existed; everyone conversed as if they had known each other for years.

Parnassah Expo founder and director Reb Duvi Honig maintained a low profile throughout the event. “I am simply overwhelmed by what I am seeing and hearing,” he explained. “There is nothing like seeing yidden get together as one, combining our business acumen and compassion to help everyone move ahead.”

Even before the expo doors closed, the success stories were already pouring in. Individual attendees each related that they met at least several individuals and/resources of interest. The men and women standing at their exhibition booths were super-enthused, talking about the scores of potential new clients and/or associates that they touched base with – many of them from regions and markets that are ordinarily out of their realm.

One sole proprietor exhibitor amassed a list of over 50 names of individuals whom he exchanged contact information with – both potential customers and quite a few that already reserved his services at the expo itself. That was a story told many times over, in many different forms. A host of career and education related resources were also taken advantage of, and exhibitors proudly displaying the bright red “We are hiring” paraphernalia related that they fielded a great many resume’s from highly qualified candidates.

Commercial mortgage giant Meridian Capital, which cosponsored the expo along with Investors Bank, was one of the various hi-end businesses that saw lots of success at their own level as well. “The traffic has been great,” said Meridian’s senior managing director Steven Ribiat. “We did a lot of relationship building at the expo and see the potential for significant future business activity from these relationships.”

At the well attended seminars and expert panels, virtually every conceivable topic in every conceivable market was discussed – all with animated debate and serious questions from both presenters and members of the audience. The full schedule of seminars was topped off by special forums held in the massive Meridian Executive Ballroom.

On Tuesday, crowds filled the ballroom to hear addresses by prominent defense attorney Ben Brafman, who discussed the importance of complying with the law in business activities, and leading entrepreneur and community activist Howard (Tzvi) Friedman, who discussed intriguing tidbits of his business journeys as well as the need to deal honorably and always look to help others. These addresses were followed by a panel of leading business executives – Neil Auerbach, Avraham Biderman, Kevin Cummings, Murray Huberfeld and Rabbi Gedalia Weinberger. The panel – moderated by renowned entrepreneur and motivational speaker Charlie Harary – fielded audience questions about the most ideal path to business success.

The final day of the expo was wrapped up by “The Accelerator” panel consisting of investors Seth Fireman, A.J. Ginsburg, Chesky Kauftheil, Charles Scharf and Rabbi Gedalia Weinberger – moderated by noted entrepreneur and activist Shea Rubenstein. The panel fielded investment opportunities on stage from four business owners with promising ideas – and made on-the-spot-offers. The back-and-forth between the presenters and investors featured enough drama to keep the overflow audience on its toes, and ended up sealing a full $1 million in investment deals in front of everyone’s eyes.

On Tuesday evening, a black-tie dinner with music was catered by Greenwald Caterers in the expo’s Investors Ballroom for the most prestigious executives and exhibitors, where chassidishe community activist Rabbi Yoel Usher Labin presented Reb Duvi Honig with a surprise award for all of his efforts. Wednesday morning’s schedule featured a vibrant minyan Shachris at the nearby Sheraton hotel for expo activists, exhibitors and attendees from across the United States and the world who were lodging there. This was followed by a lavish networking breakfast by Four Corners Restaurant, attended by over 100 exhibitors.

Towards the end of the event, Parnassah Expo presented its coveted “Most Innovative Exhibitor and Product” award to Immediate Marketing and Business Consulting for its eye-catching booth design and its new “Immediate Business Indicator” computerized business analysis tool, which garnered immense interest at the expo.

“All the work that was invested into this was worth it even for just one of the success stories here,” Reb Duvi Honig reflects. “The countless successes are due to siyatta dishmaya and the tireless work of an incredible team – most notably my wife Esther, executive manager Mrs. Devorah Wahl, and Reb Mutty Tress.”

Much to the surprise of everyone – other than those intimately familiar with the ambition and drive of Reb Duvi Honig – plans are already underway for an even “bigger and better” 2015 Parnassah Expo, b’ezras Hashem.