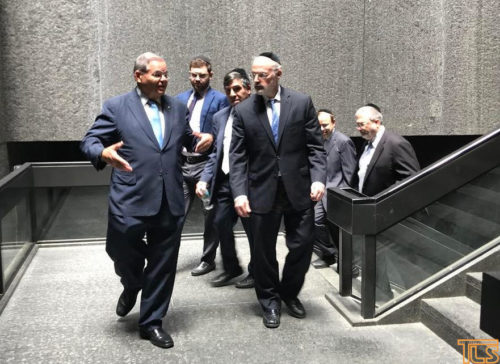 The landmark “Taylor Force Act” easily passed the Senate Foreign Relations Committee on Thursday, clearing the bill for a vote in the full Senate, where it is hoped to pass by a wide margin and later be signed by President Trump.

This legislation is named in honor of a 29 year old American war hero named Taylor Force, who was brutally stabbed to death in March of 2016 by a Palestinian terrorist while on a Vanderbilt Study trip to Israel. The bill would reduce U.S. aid to the Palestinian Authority (PA) measure for measure, each time the PA supports terrorists and the families of terrorists.

The PA has long had an official government ministry, with an official financial incentive system for those who murder Israelis. The PA pays based on how heinous the crime, with the more people murdered the larger the payout. The PA also has an entire social system of financial and societal benefits, including social welfare, guaranteed jobs, and preferences in hiring and in getting into college for those who attack Jews. The PA pays a special bonus for Israeli Arabs who murder Israelis and bonuses if the murder victim is a Jew.  The PA pays for the murder of civilians and soldiers alike, and even pays for the murder of babies.

For many poor Arab families with many children, the PA’s payments often encourage one family member to murder a Jew, in order to bring permanent financial salvation to his entire family. Impoverished Palestinians are often tempted to kill a Jew simply on financial grounds, willing to risk an 8 or 10 year prison sentence, knowing that they will bring financial stability to his or her parents or siblings – and to be considered a hero by his family and society too.

While much of the brutal murder by terrorists is stoked by hatred, this financial aspect often pushes marginal individuals to act – to be recognized as a hero and lauded by their families.

Support for the legislation, which was authored by Senator Lindsey Graham of South Carolina and supported by all Republicans on the Committee, drew strong support from Committee Democrats as well, who supported by the legislation by a 6-4 margin, despite the opposition of various Democratic senators and left wing interest groups. A key force behind the Democratic support was the strong support of New Jersey Senator Robert Menendez, the influential former Chairman of the Committee.

Rabbi Aaron Kotler of The Lakewood Vaad relates that the Vaad has been active in advancing this legislation since early 2016, working with the authors of the bill in Washington, with whom the Vaad has a long time relationship. He shared that Vaad members have had extensive conversations with Senator Menendez and Booker, and with Congressman Smith and numerous others, asking that they sign on as sponsors to the Taylor Force Act.

The Vaad notes that Senator Menendez supported the legislation despite initial reluctance of other Democrats to back it, and that it was Menendez’s support that helped bring other Democrats on board. “We have always found Senator Menendez to have a keen understanding of the value of human life and to be at the forefront of caring about Israel’s security,” says Rabbi Kotler. “We warmly thank our long time Senator for his exceptional courage and his strong focus on moral principles over politics.”  The Vaad is continuing its discussions with Senator Booker in the hope that he too will support the bill.

Rabbi Kotler notes that while this legislation may seem to be outside the immediate purview of the Vaad, “this bill appears to be a matter of direct pikuach nefesh, fundamentally the same as the saving of Jewish lives that Rav Aharon Zatzal battled for during the Holocaust.” “Right now the US government funds the PA, and the takes those funds and gives them fund the murder of our fellow Yidden, and of Americans like Taylor Force. Hopefully with Siyata D’Shmaya, this legislation will force the PA to change its behavior and save neshamos,” said Rabbi Kotler.