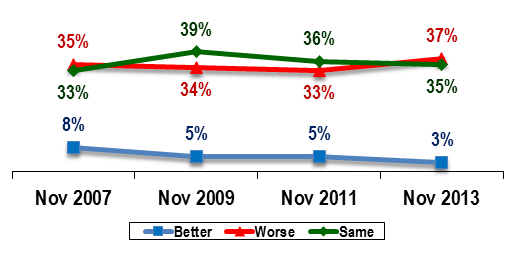 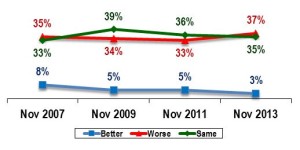 Good ratings on all roadways have seen a drop, according to a recent AAA survey of motorists. The survey was completed in November, before the long winter took its toll on the roadways. The majority of commuters (37%) say their commute has gotten worse for the first time.

All roadways have declines in good ratings, but toll roads and major interstates (such as I 295) still were among the best roadways, according to commuters. Toll roads were ranked as the best maintained with 70% rating the commute Good or Excellent, Interstates received a 60% Good or Excellent rating.

Rankings on roadways were fairly consistent throughout the state, with only small geographic differences, except on the local roadways where South Jersey had significantly more poor ratings. “What we can see is that the years of inadequate funding can be clearly seen by commuters in the conditions of their roadways,” said Tracy Noble, spokesperson for AAA Mid-Atlantic. “Across the state commuters are seeing worsening conditions and feel there is no end in sight.”

Commuters who use Mass Transit also had poor ratings for their commutes, with 53% saying their commute has gotten worse over the last 2 years. Poor ratings aside, transit usage continues to increase, 12% said they used mass transit for part of their commute, up from 7% in 2009.

Despite frustrations with their commutes, for the first time since 2005, motorists are wary of supporting new taxes to pay to address these concerns, marking a significant change in public sentiment.

“I would support a reasonable increase in the gasoline tax to be dedicated to the Transportation Trust Fund, so long as there are safeguards in place to ensure there is no waste, abuse or diversion of that money.”

“While commuters want roadway repairs to be financed there is a general distrust that the money will get to the right place and an aversion to any increases in taxes,” Noble said. “This new trend is alarming but at the end of the day a dedicated, stable, sustainable funding stream must be established and that will mean additional costs on the front end, but will save motorists time and money long term.

While there was a lack of support for an increase to the gas tax, respondents did feel that everyone should pay into the system. Fifty-eight percent of motorists agreed that drivers of electric and alternative fuel vehicles should pay a fee that goes into the Transportation Trust Fund.

“As legislators look to find ways to finance the Transportation Trust Fund they should find ways to ensure that everyone who uses the roadways is paying their fair share,” said Noble.

About the poll: This is an analysis of a telephone survey conducted among 1,000 New Jersey motorists in November, 2013. The margin of error for this survey is +/- 3.1% at the 95% confidence interval. [TLS]