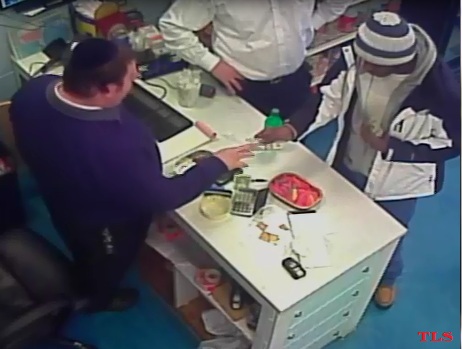 SURVEILLANCE VIDEO: A surveillance video at the Fishing Line store in Howell shows a man paying for an item with what turned out to be a counterfeit $20 bill, the store manager tells TLS.

The video shows the suspect, a black male, walking into the shop and removing a soda from the refrigerator and walking up to the counter to pay.

The suspect handed the store clerk a $20 bill, and left the store.

But the keen store clerk had a feeling something wasn’t just right, and can be seen opening the cash drawer again to inspect the bill.

Realizing it was a fake, he – and another co-worker – went after the suspect, but he had already gotten into a taxi and left the area.

After having the bill checked by a device at a neighboring store, and confirming it was indeed counterfeit, police were called, the store manager tells TLS. Police also confirmed it was counterfeit, and took the bill.

Lakewood Police say a similar incident occurred on a NJ Transit bus in Lakewood this week as well. It’s unknown if the incidents are connected.

Howell Police are investigating the incident.