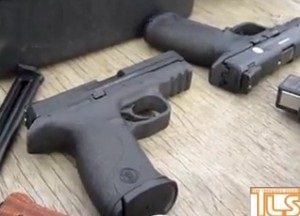 Legislation to create a statewide gun buyback program to cut back on the number of firearms out in communities throughout the state was released Thursday by an Assembly panel. The bill was sponsored by Assemblyman John McKeon, Assembly Speaker Vincent Prieto, Assembly Majority Leader Lou Greenwald, Charles Mainor, Mila Jasey and Gary Schaer.

“Gun violence claims lives every day. In some communities, it is an-all too common reality,” said McKeon (D-Essex, Morris). “We realize a gun buyback program alone will not eliminate gun violence, but it can help enhance public safety by reducing the number of firearms in circulation.”

“A gun in the hands of a violent or disturbed individual is a bad combination,” said Prieto (D-Bergen, Hudson). “This can help keep guns from falling into the wrong hands by creating a controlled environment where individuals looking to get rid of their weapons can do so safely and anonymously.”

“A gun buyback program is not the be-all and end-all solution to gun violence, but it can help make a dent by giving people the option to safely discard their weapons,” said Greenwald (D-Camden, Burlington). “Anything we can do to reduce the number of guns in our communities is a worthwhile pursuit.”

The bill (A-2895) would require the Attorney General to establish a statewide gun buyback program that would allow New Jersey citizens to voluntarily and anonymously surrender firearms and weapons in their possession in exchange for a monetary reward. The form of the reward, such as cash or debit card, would be determined by the Attorney General.

“Gun buyback programs are successful in getting a good amount of firearms off the street,” said Mainor (D-Hudson). “Giving residents an incentive and a safe alternative to disposing unneeded firearms is a method that has worked in the past to decrease the likelihood of weapons falling into the wrong hands.”

“Unfortunately, there is not just one solution to curbing gun violence in our communities,” said Jasey (D-Essex, Morris). “A buyback program is one proven way of getting rid of firearms. Every gun we can get off the street is a small victory.”

“Gun buyback programs are an integral part of a larger effort to reduce the overall numbers of guns available in our communities,” said Schaer (D-Bergen, Passaic). “Each firearm we remove from circulation helps to prevent another devastating tragedy. Each one turned in, potentially saves a life.”

Under the gun buyback program established in the bill, the Attorney General would be required to hold at least nine gun buyback programs a year throughout the state. At least three each would be held in the northern region, central region, and southern region of the state, and at least one program in each region would be held in an urban area with a high crime rate. The Attorney General would have to get the crime rates of the various towns by consulting the most recent issue of the Uniform Crime Report, which is published by the Department of Law and Public Safety.

The bill directs the Attorney General to partner with local law enforcement agencies and community organizations in coordinating gun buyback events when possible.

The gun buyback program would be funded by: forfeiture funds received by the Attorney General as instrumentalities of crime; private donations from corporations, small businesses, and individuals; and any other monies that may become available to the Attorney General.

The Attorney General’s Office launched a gun buyback initiative in 2012. To date, a total of ten buybacks conducted across New Jersey have recovered a total of 15,958 firearms, including more than 7,300 handguns and nearly 1,900 illegal guns.

The bill was released by the Assembly Appropriations Committee. [TLS]