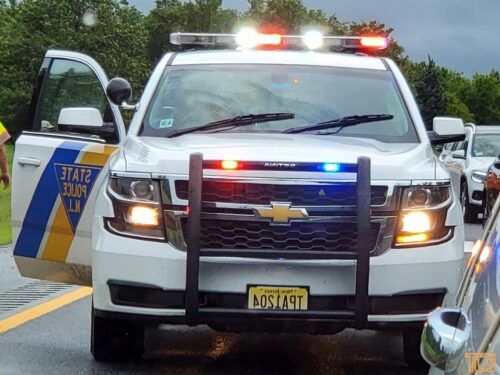 The New Jersey State Police have arrested Russell T. Brown, 62, of Shallotte, N.C., after he allegedly pointed a handgun at another motorist and led troopers on a motor vehicle pursuit that spanned multiple counties.

On Friday, November 12, at approximately 4:18 p.m., Operational Dispatch Unit North advised troopers that they were on the phone with a caller who stated a man driving a white Chrysler Town and Country exited his vehicle and pointed a handgun at him after a road rage incident. The victim stated that the incident occurred on Interstate 287 southbound at milepost 35 in Morris Township, Morris County. Troopers responded to the area and observed the Chrysler traveling southbound on I-287 at milepost 23 and continued to follow the minivan onto Interstate 78 eastbound.

In the area of milepost 32.2, in Bridgewater Township, Somerset County, troopers attempted to conduct a high-risk motor vehicle stop on the Chrysler. With emergency lights activated, troopers stopped the Chrysler and provided verbal commands to the driver to exit the vehicle via the State Police vehicle public address (PA) system. The driver exited his vehicle, but after several minutes of refusing the trooper’s commands, he got back into the minivan and fled the scene.

Troopers continued to pursue the Chrysler with emergency lights and sirens activated as it traveled through multiple jurisdictions on various roadways including I-78, I-287, County Route 622, State Highway 18, and ultimately the New Jersey Turnpike. During the pursuit, the suspect intentionally struck a State Police marked vehicle on State Highway 18.

At approximately 5:52 p.m., troopers successfully stopped the Chrysler on the New Jersey Turnpike southbound at milepost 52 in Mansfield Township, Burlington County. Once stopped, troopers ordered the driver out of the vehicle, but he refused to exit. Troopers then physically removed the driver from the vehicle and arrested him. A female passenger in the vehicle was arrested without incident. During the investigation, troopers discovered a 9mm handgun in the Chrysler. The driver and passenger were relayed to State Police Somerville Station for processing. Troopers later determined that the female passenger was an unwilling participant during the pursuit and was not charged.