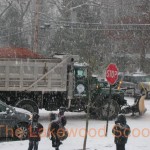 The late February storm that helped break the Shore area’s seasonal snowfall record also broke some snow-removal budgets and is straining others, local officials say. Road crews throughout the region were sent scrambling once again after the Feb. 25 storm dumped between 5 and 13 inches of snow. Tabulations of what that cleanup cost county and local governments weren’t available until late last week. Monmouth County spent another $324,000 on cleanup, said county spokesman Bill Heine. So far this season, he said, snow removal has cost the county $1.5 million.

Included in the latest cost calculation is about $118,000 in labor and overtime costs, Heine said.

“The county right now is within its budget for snow removal,” he said in an e-mail.
“However, it depends on what happens the rest of this month. Other variables include whether a storm hits on a Sunday, which is double time.”

Those costs, she said, included material and $63,884 in overtime.

The costs did not include other Ocean County departments, such as Buildings and Grounds or Parks, she said. Flynn could not be reached to provide a tally for the entire season.

Heine said Monmouth County would be over budget by now if it were not for the change it made two years ago in the materials it spreads on roads, which allowed it to save money on supplies and labor.

Monmouth now uses a combination of salt brine and magnesium chloride-treated rock salt, he said. The chemicals, which he said do not harm the environment or equipment, keep snow from bonding to the roads.

Shore area towns have had to shoulder their share of the cleanup costs as well.

Huhn said there’s still some room in this year’s budget for cleanup.

“We still have some left. We have enough for another couple storms if we need it,”
he said.” “Hopefully there won’t be any more.”

That total includes supplies, overtime and the cost of outside contractors, he said.

“Even the mayor (Michael Reina) was out plowing,” Del Turco said.

He said the township’s snow-removal budget “is shot.” The storms even depleted a $70,000 contingency fund he’d set up, he said.

“Nobody had expectations of the magnitude of these storms,” Del Turco said. “We’re all getting hit hard. It’s been a nightmare for everybody.” APP