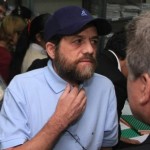 U.S. Congressman Chris Smith (NJ-04), chairman of the House panel that oversees international human rights, met with high-level Bolivian government officials in the capital city of La Paz to advocate on behalf of American businessman Jacob Ostreicher, held in Bolivia for over a year without formal charges and without bail at the dangerous Palmasola prison.

Smith met with officials, including Bolivian Minister of Government Carlos Romero and Minister of Justice Cecilia Luisa Ayllon, as well as Vice Foreign Minister Juan Carlos Alurralde, to discuss the case of Ostreicher, whose daughter lives in Smith’s district in New Jersey. According to Smith the conversation was very “in-depth and candid.”

“After a long meeting, Minister Ayllon concluded that ‘Your agony for Jacob Ostreicher is like my agony for Bolivians who are in the same situation.’ As a judge for 13 years herself, she pointed out the abuse of filing of false charges and other irregularities like the process of recusing judges—leading to lengthy delays—is a widespread problem,” Smith said.

“Minister Romero listened to me attentively as I recounted the injustice of Jacob’s story of repeated court delays initiated against him by the prosecutors and lack of evidence against him,” Smith said. “He also said he and his chief of staff, who was in the meeting, will vigorously follow up.

“For well over a year, even though he was not charged with any crime, the original document that led to his arrest and jailing specifically stated that he was guilty until proven innocent,” Smith said. “That’s a violation of Bolivian law and is unconscionable. Jacob Ostreicher’s case is an egregious example of a violation of both the Bolivian constitution and the criminal code. Frankly, both Jacob and the people of Bolivia deserve better.”

Smith, who was in the courtroom with Jacob on Monday, said the Ministry of Government prosecutors demanded that the judge recuse himself, a tactic used to delay and deny the administration of justice.

“Let’s not forget the hearing Monday was about bail for an American who was charged with nothing and who continues to suffer in prison,” Smith said. “Prosecutor Fernando Rivera said ‘This hearing cannot take place’ and told the judge ‘You cannot preside over this case,’ offering no proof as to why. If the judge heard the case for bail, the prosecutor told him ‘we will be forced to initiate legal actions against you.’”

Smith said that while the judge seemingly rejected that threat Monday, he nonetheless ordered that the recusal issue be considered by another judge or panel of judges, and thus never decided on Jacob’s bail, resulting in yet another delay.

“Bolivian law suggests that such a hearing on the judge recusal issue should occur within 24 to 72 hours,” Smith said. “To the best of my knowledge, we are unaware if it will be heard within this time frame.”

Smith noted that on Sept. 23, 2011—nine months ago—another judge had ordered Ostreicher released on bail, only to reverse himself within days without explanation.

In every meeting with government officials in La Paz, Smith said he conveyed a strong sense of urgency that he was deeply concerned about Jacob’s deteriorating health, both the consequences of his two-month hunger strike ongoing since April 15— and his long, unjust incarceration. The congressman said he was concerned over any opportunistic infection that a man with a degraded immune system could contract. Smith said he also was worried about possible violence in the prison.

“I raised concerns with officials regarding Jacob’s physical safety in the prison,” he said. “He is at grave risk.”

Noting that he authored the historic, comprehensive U.S. human trafficking laws—The Trafficking Victims Protection Act of 2000—Smith said he has “zero tolerance of trafficking in all of its ugly manifestations, including human trafficking and narco-trafficking.” In fact, Smith had meetings this week with a special unit of Bolivian prosecutors and forensic doctors who assist women in prosecuting trafficking cases. He also visited trafficking victims shelters for minors (currently, there are no such shelters for adults in Bolivia). He planned additional meetings Friday, including a press conference on the Ostreicher case set for 10 a.m. (EST) at the U.S. embassy in La Paz.

“I would not be here if I weren’t absolutely convinced of Jacob Ostreicher’s innocence,” Smith said.

On June 6, the congressional subcommittee on human rights Smith chairs heard from Ostreicher’s desperate wife and daughter, as well as a former FBI agent familiar with the case who also asserts there is no evidence against Ostreicher. Click here for testimony and other information from the June 6 hearing. TLS.