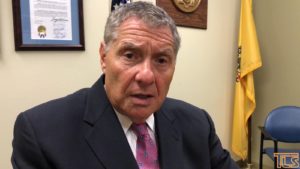 “The intent of this bill is to prevent acts of anti-Semitism, hatred and bias in our schools and universities, especially the expressions of hate that are employed to incite acts of intimidation and violence. We want to be clear that this is about protecting the safety and general welfare of the diverse communities of New Jersey. At a time when national figures are fueling divisiveness and hatred, it is important that we take a stand against prejudice in all its forms.

“We believe that free speech and political opinions can be preserved at the same time we counter the actions that condone and even promote discrimination and violence. We welcome a constructive dialogue about preserving the rights of free expression as we oppose acts and expressions of hatred and bias. A discussion on how to best achieve these goals with this legislation is worth having.

“We look to the fact that much of the language in the legislation is taken from the International Holocaust Remembrance Alliance’s definition of anti-Semitism and has been adopted by nearly 20 countries, including the United Kingdom, France, Belgium, Germany, the Netherlands and Canada.

“One of the goals of this bill is to increase awareness of the destructive impact of anti-Semitism and hatred targeted at any group so that we can join together to protect the safety of all communities and the rights of everyone – including free speech.”