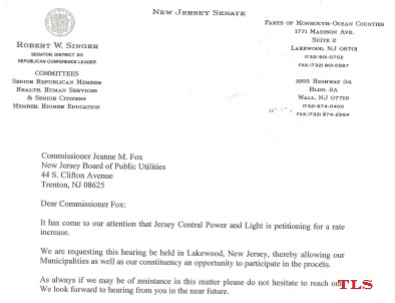 Lakewood’s Legislators of the 30th District, and Committeeman Menashe Miller, want the Board of Public Utilities to hold a hearing in Lakewood before agreeing to any sort of rate hike the Jersey Central power and Light company recently petitioned for.

In a letter issued to the Commissioner of the NJ Board of Utilities Jeanne M. Fox, Senator Singer and his Assemblyman wrote that Lakewood constituents should have a say in the matter.

“It has come to our attention that Jersey Central Power and Light is petitioning for a rate increase”, the letter read. “We are requesting this hearing be held in Lakewood, New Jersey, thereby allowing our Municipalities as well as our constituency an opportunity to participate in the process.”

In December, then Mayor Miller penned a similar letter.

“We are home to 93,000 residents, and this would give our residents a chance to voice their concerns”, Miller wrote the Commissioner.

The energy company requested a 1.4% rate hike, which the company said would offset the costs of improving infrastructure damaged by last year’s Tropical Storm Irene and October snowstorm.

Shmuel Binder, the Vice Chairman of the LUAC, is the one who urged the Legislators and then Menashe Miller to get involved.

“When I saw that they filed for another increase, I said I have to get on top of it”, Binder says.

A separate increase for damages caused by Hurricane Sandy, estimated by the company at over $500 million, is expected to be filed at a later date.

CLICK HERE FOR THE LETTER FROM SINGER, RIBLE AND KEAN.

CLICK HERE FOR THE LETTER FROM MENASHE MILLER. TLS.