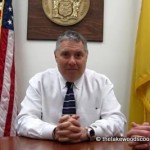 “I do not support the death penalty out of a need for revenge or due to malice in my heart, neither do the many individuals I have met who have suffered from heinous crimes,” Singer stated regarding the parliamentary tactic used by the Trenton Democrats to block the consideration. “I support the death penalty because sometimes it is the only way to achieve justice for the victims and families affected by horrible crimes.”

Singer noted that his legislation would apply in the tragic murder of 2 year old Tierra Morgan-Glover. She drowned when her father allegedly tossed her off a bridge, still strapped in her weighted down car seat while conscious and alert.

“I am well aware that the death penalty will not bring back a murdered child, slain police officer or a victim of terrorism,” Singer continued. “For certain crimes, life in prison is just not punishment enough.” TLS.